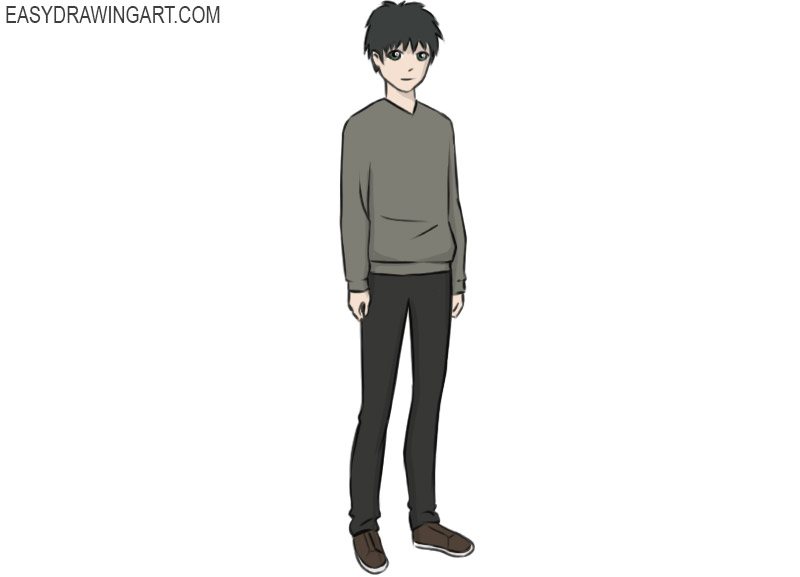 Do you want to learn how to draw anime? If so, then this instruction made by the artists of Easydrawingart.com has been created especially for you!

So, what do you need in order to draw anime in the same way as the artists of Easydrawingart.com did? You will need a simple pencil and a piece of paper or a graphics tablet. If everything is ready, and you want to learn how to draw an anime, then let’s get started!

First of all, create a head, chest, and pelvis in the form of three ovals. Next, depict a line of the spine that connects all these three ovals. 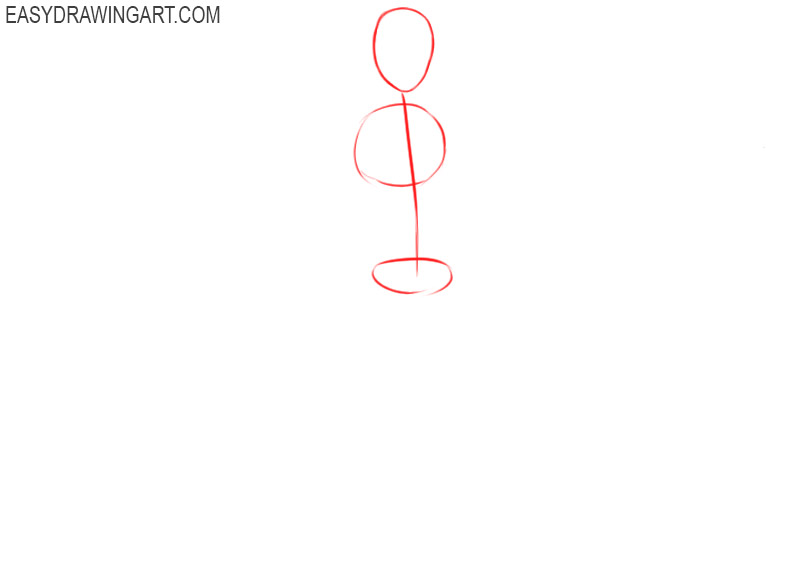 Now use simple lines to create limbs. Be sure to mark the joints with circles. By the way, if you want to learn how to create anime proportions, write to us about this in the comments. 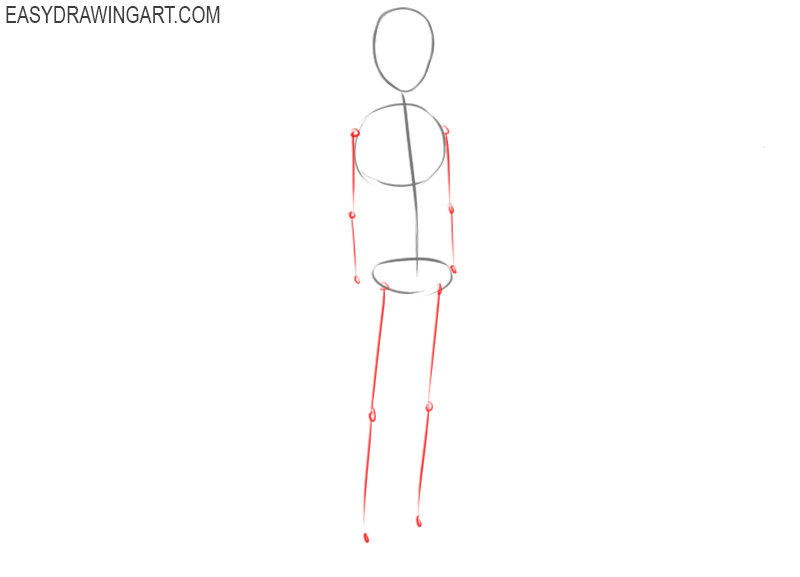 Create two lines on the head that will serve as landmarks for the face. Next, connect the head to the chest and the chest to the pelvis, that will create a torso. 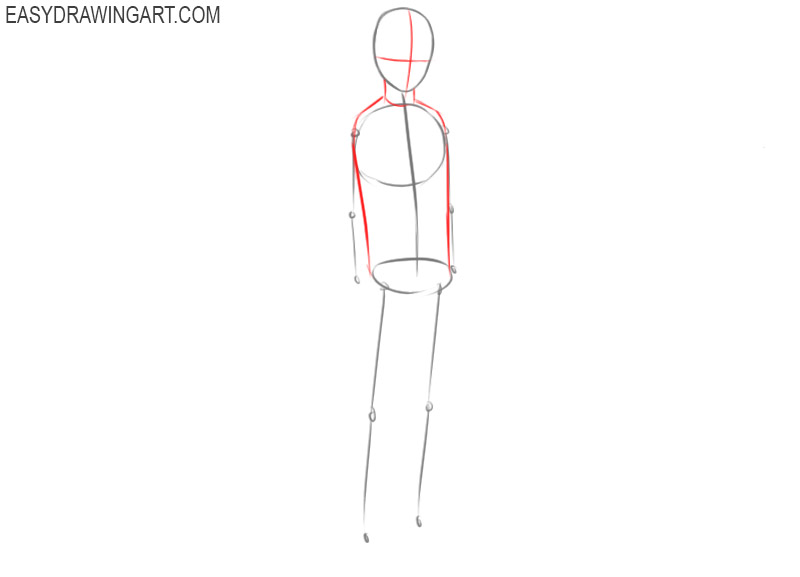 So, to create limbs, you should also use simple geometric shapes. The arms themselves are in the form of cylinders, and the shoulder and elbow joints in the form of balls. 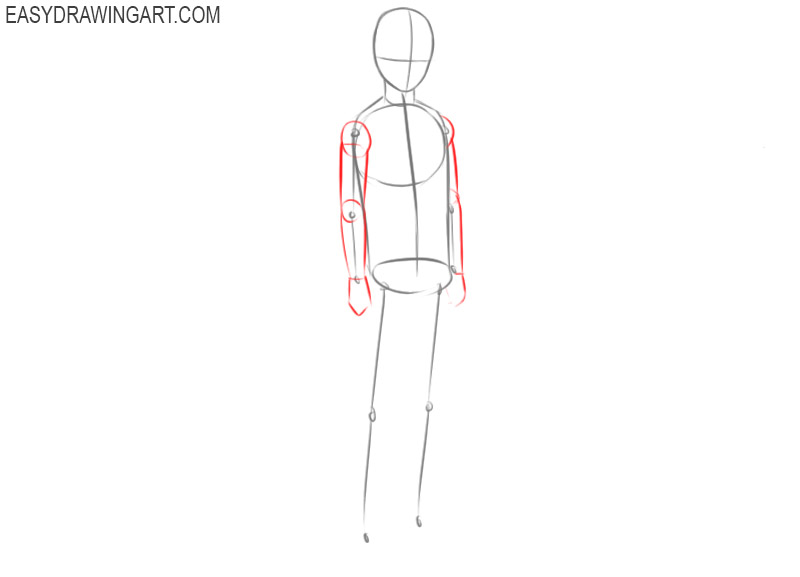 The legs should be created in the same way as the arms – that is, used cylinders for the upper and lower legs, and a ball for knee joints. Do not forget to depict the feet. 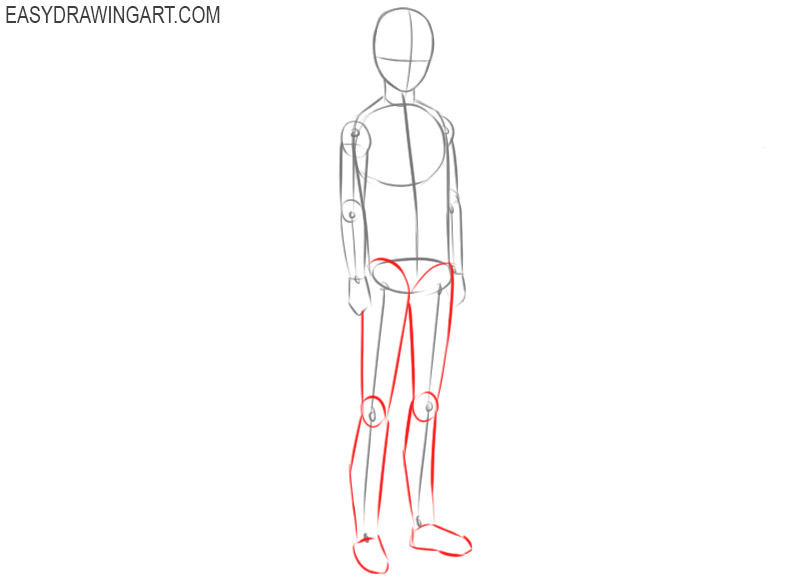 Using the guidelines from the third stage, create eyes, nose, and mouth. By the way, to learn more about this, go to our article on how to draw an anime face. 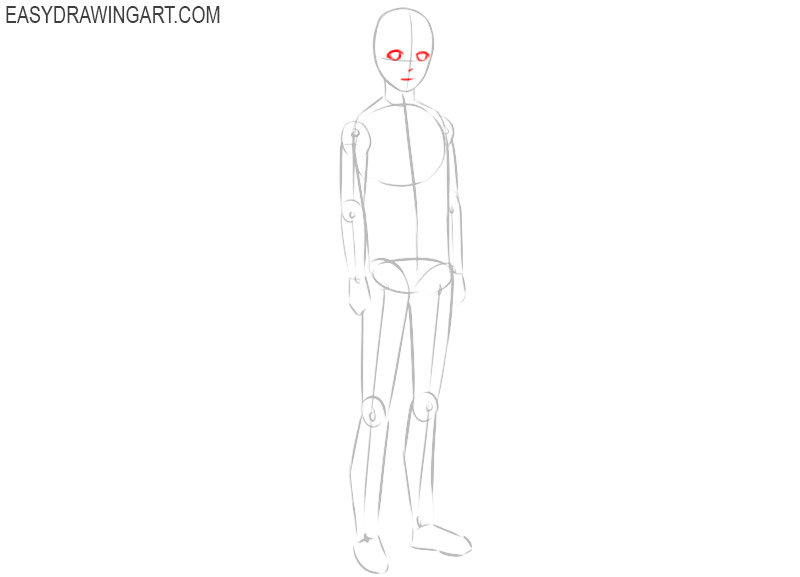 So, let’s give the anime head a more regular look. Let’s start with the jaw, giving it a more angular appearance. Next, portray a visible ear and neck. 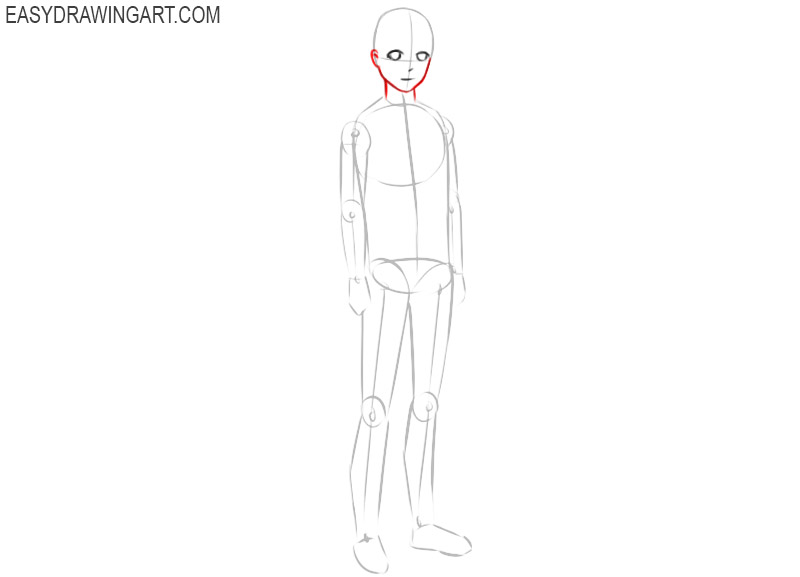 This stage of the instruction on how to draw anime will be super simple because we depict hair here. They should be depicted using a large number of short lines. 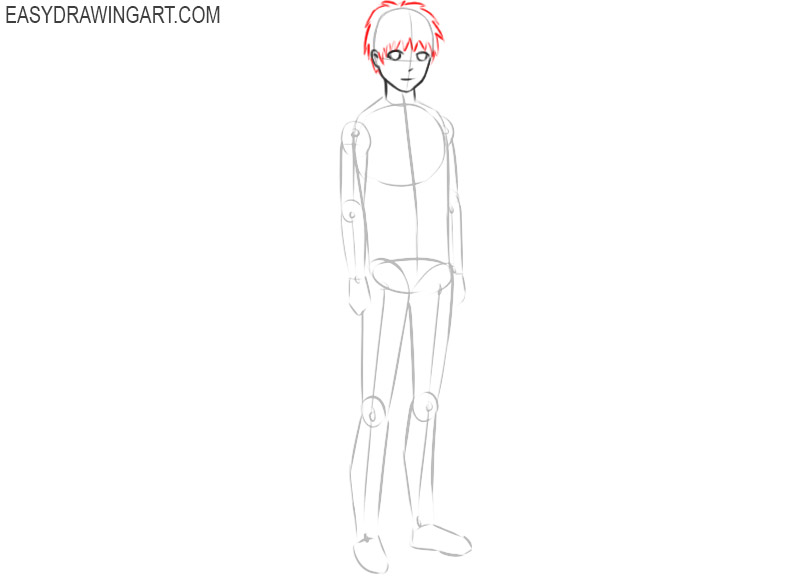 Let’s work with the torso now. Depict the contours and folds of clothes, as did the artists of Easydrawingart.com. By the way, in the instruction on how to draw anime clothes, you will learn about this in detail. 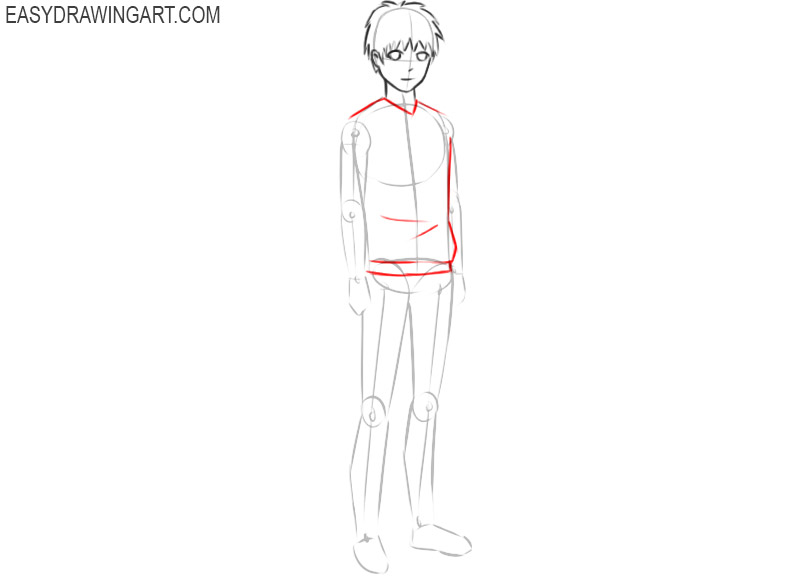 Now we will do the same, but with the arms – that is, we will create the outlines and folds of the sleeves. Add cuffs and extra pleats if needed. 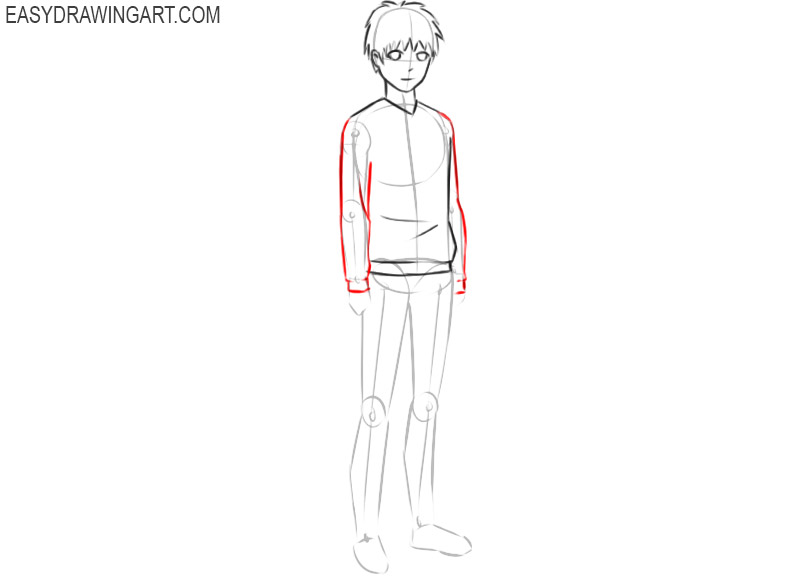 Anime hands are very easy to portray because they rarely have complex shapes and details. So, depict everything as the artists of Easydrawingart.com did in the sketch below. 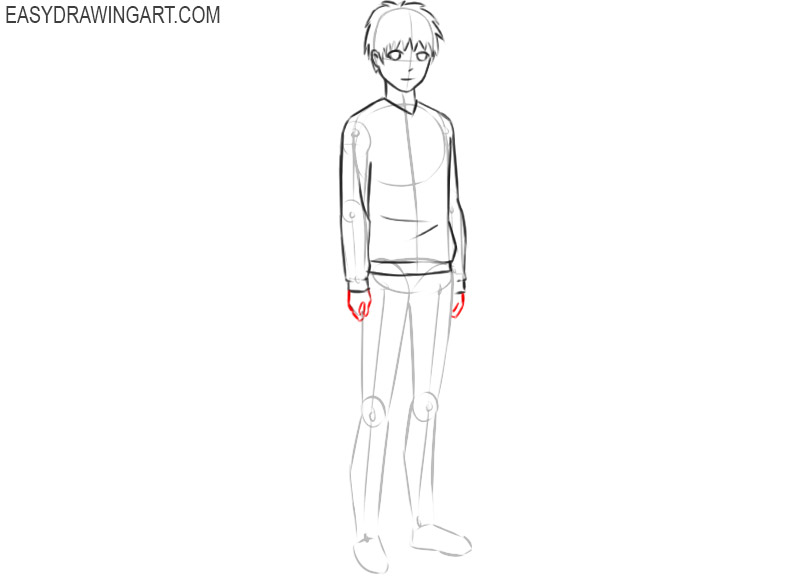 Trace the legs in smooth lines, creating pants. In the area of the knees and ankles, create some simple folds. Pants can be either wide or narrow, as in the example from the artists of Easydrawingart.com. 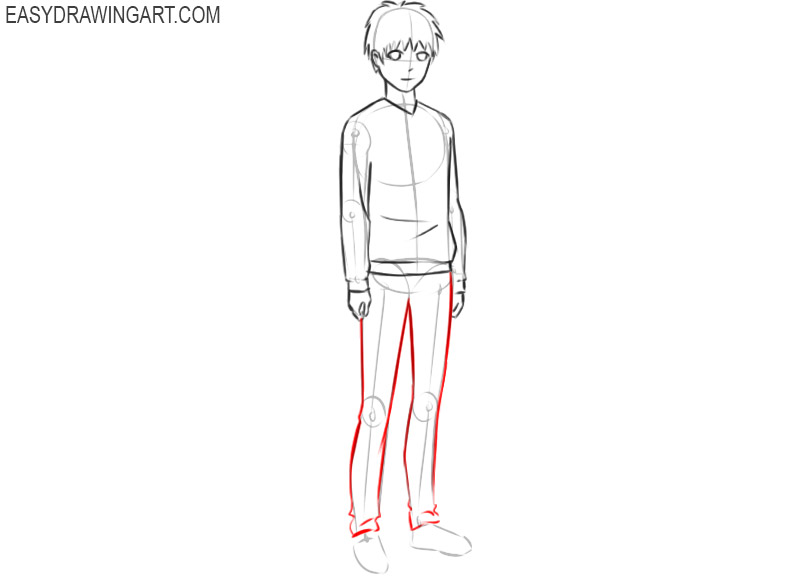 Anime people most often wear sneakers. In smooth lines, depict the contours, noses, and soles, as did the artists of Easydrawingart.com in the sketch below. 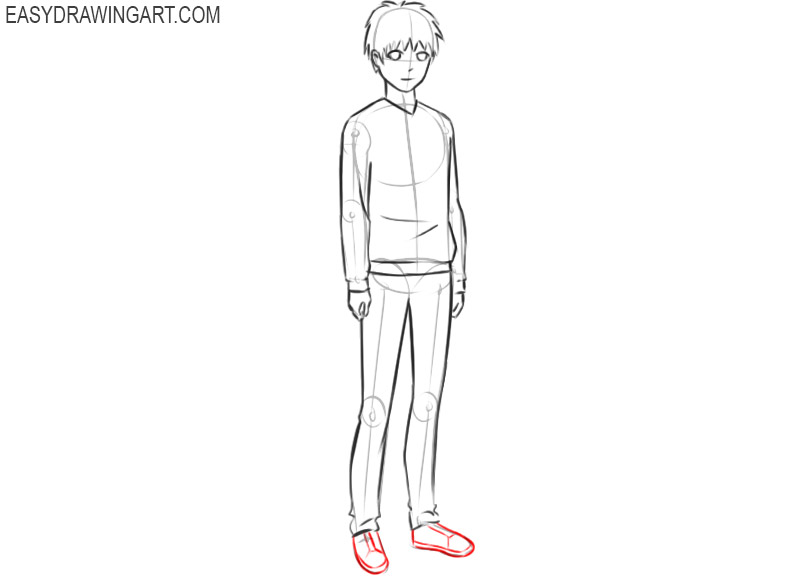 Now put the pencil aside and turn to an eraser, because now is the time for it! Carefully wipe off the guidelines from the anime drawing, then use a dark pencil or ink to trace everything so that the art is aesthetically pleasing and clear. 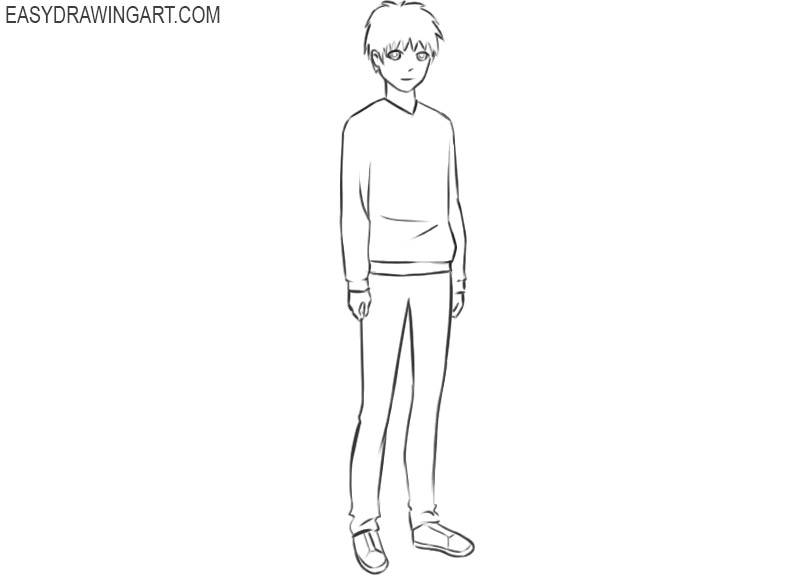 Now you can turn your imagination to the maximum because it’s time to paint anime. You can use the color palette proposed by the artists of Easydrawingart.com, or paint the anime in any other colors.

The path on this page is completed, and if you have not gone astray, now you know how to draw anime.