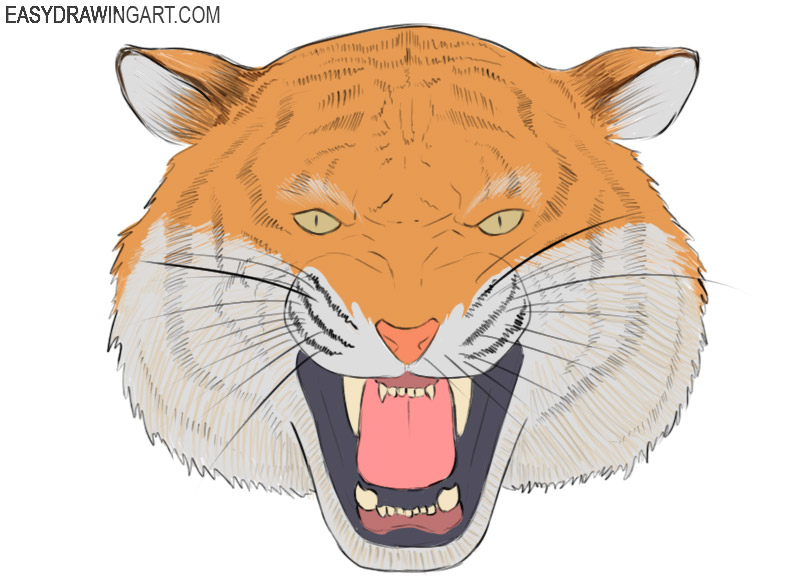 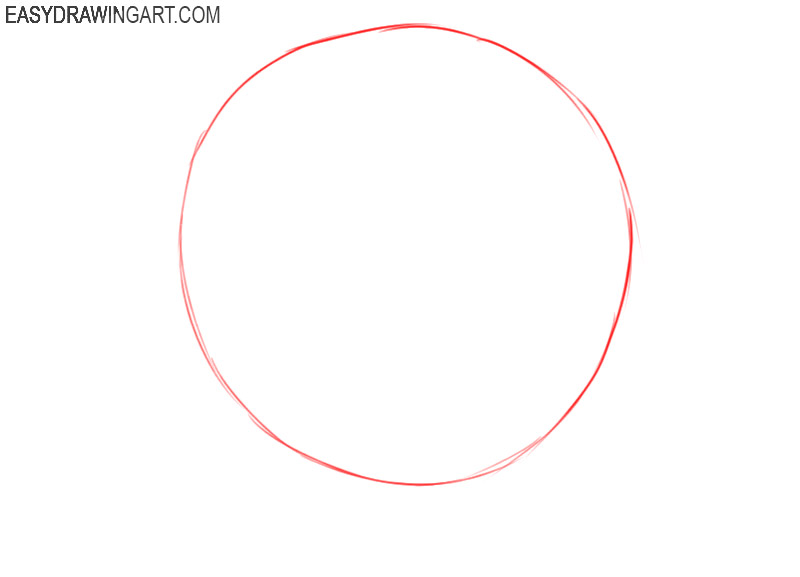 Now let’s portray the eyes of our big cat. They look like two almond-shaped geometric figures located just above the center. 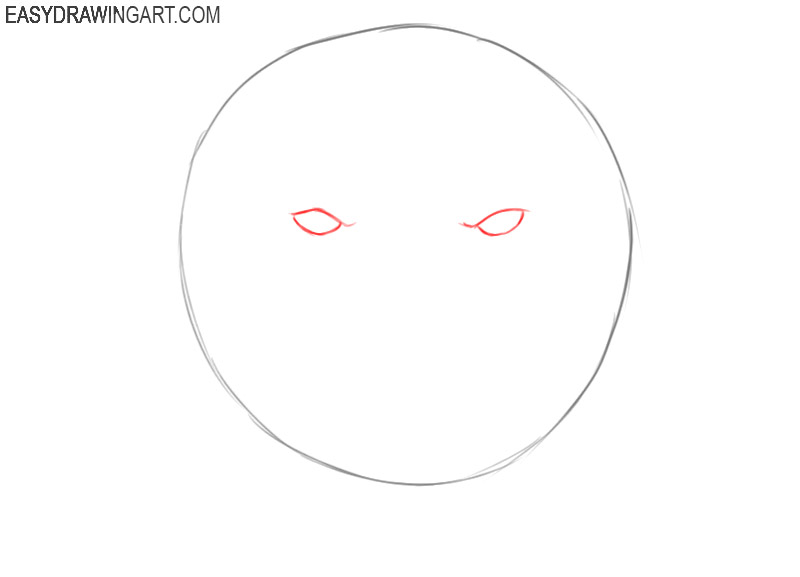 Now in the lower third of the cat’s head, depict a nose. It looks like a triangular geometric figure with nostrils inside. 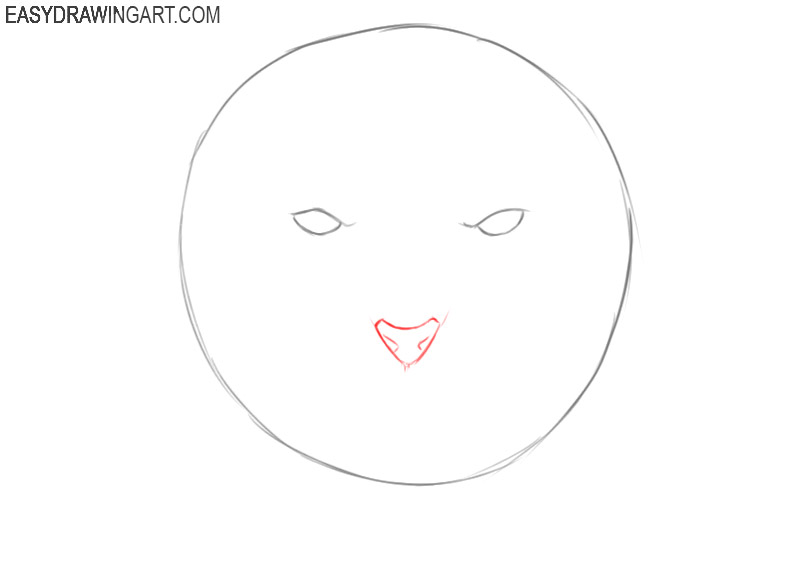 Now let’s depict the top part of the tiger’s mouth, as the artists of Easydrawingart.com did in the image under these words. 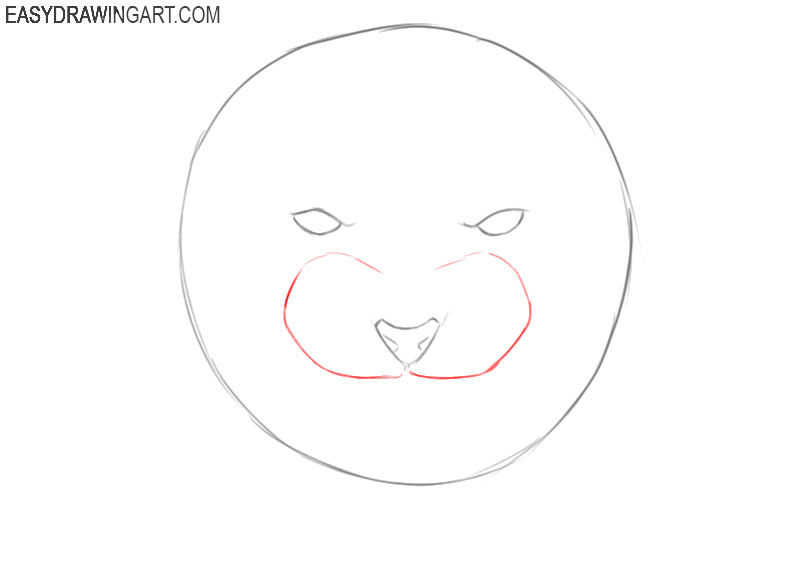 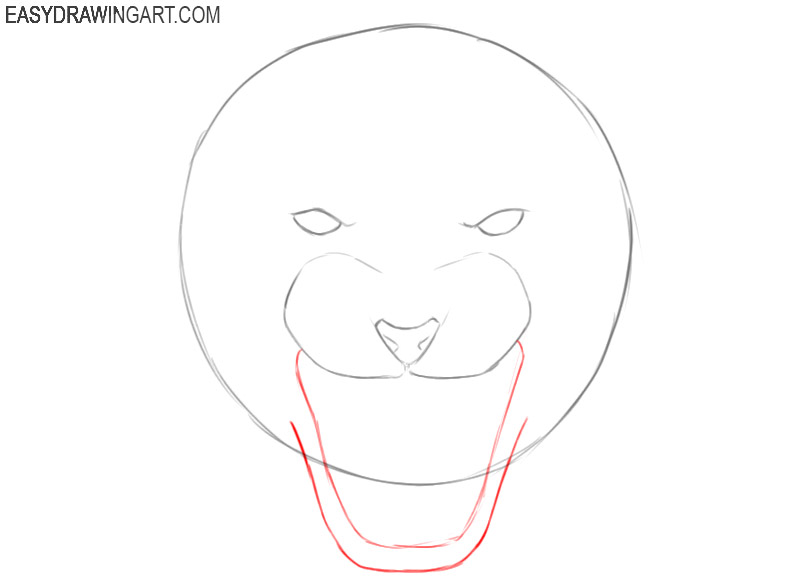 Now go back to the upper jaw and depict the teeth. Note that the fangs are significantly larger than the central teeth. 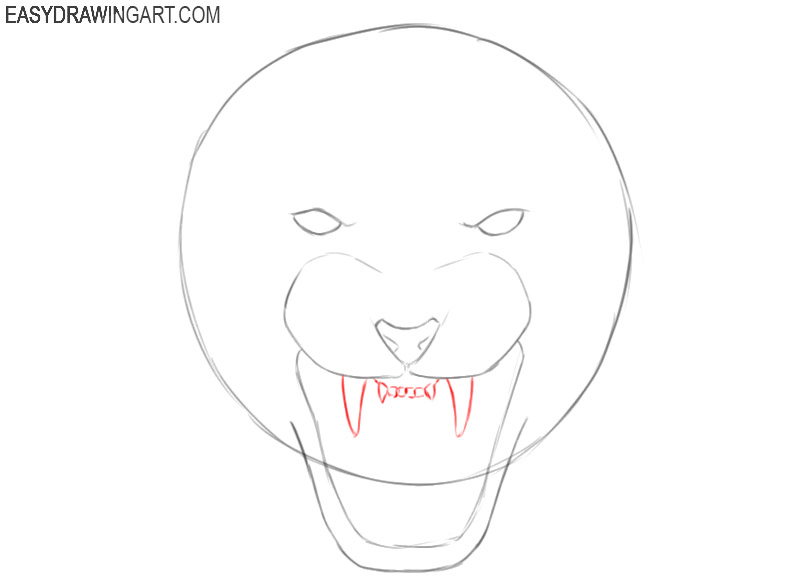 Now use a U-shaped line to depict the tongue. After that depict the lower teeth. Note that due to a different viewing angle, they look different than the upper teeth. 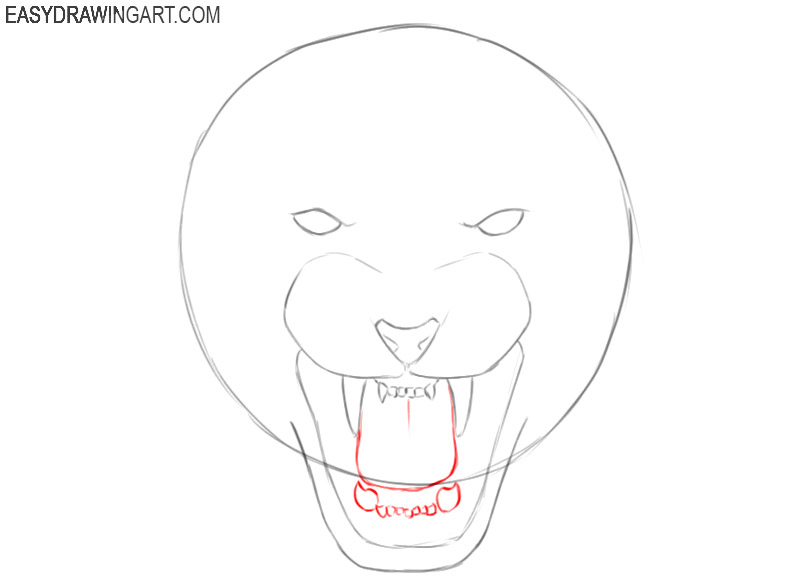 Now depict the lower gums. After that portray the wrinkles between the eyes to show that our big kitty is very angry right now. 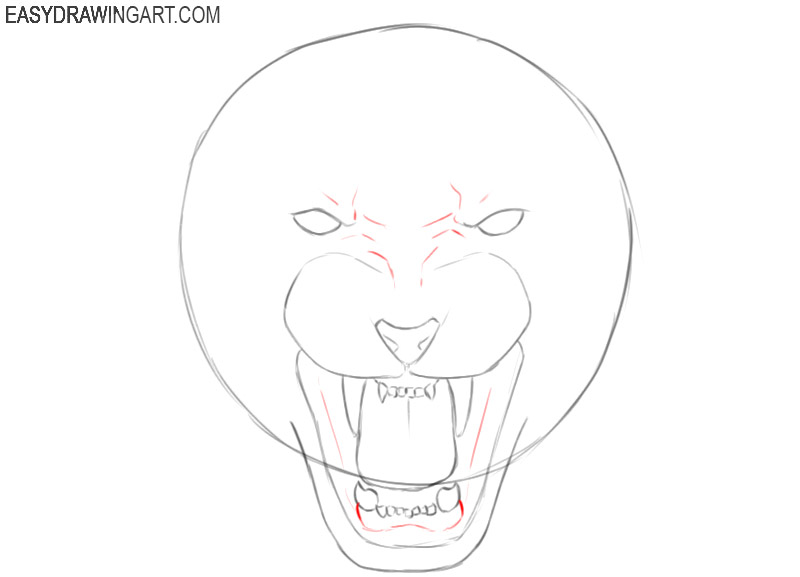 Now go to the top of the head and depict the ears as in the image below these words. They are slightly omitted, which makes the tiger look even angrier. 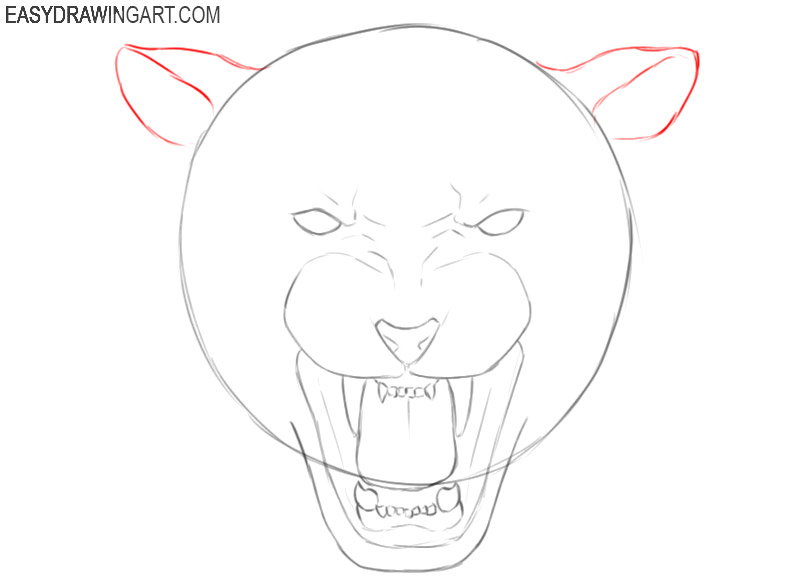 Now let’s give the tiger head drawing a more regular shape. To do this, depict the cheeks with ragged hairy lines on the sides of the face. 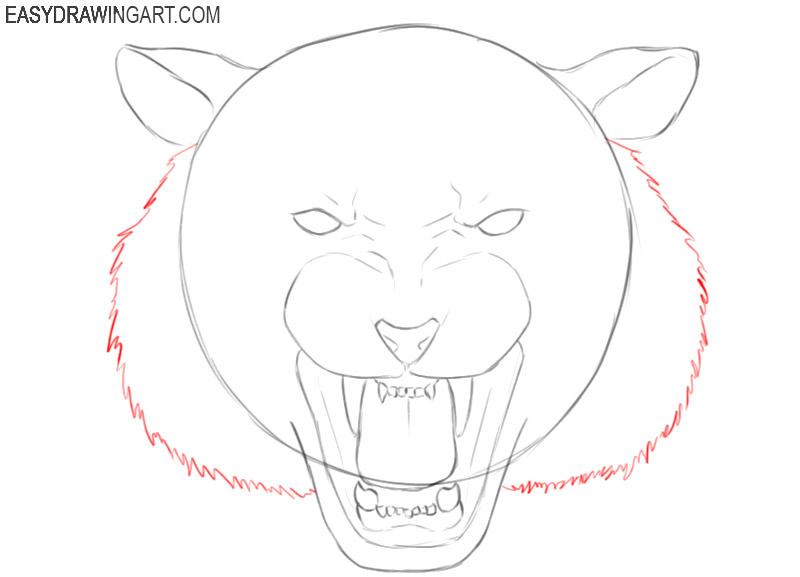 Now let’s get rid of auxiliary lines from our drawing of the tiger head with the help of an eraser. After that, trace everything with clear and dark lines. 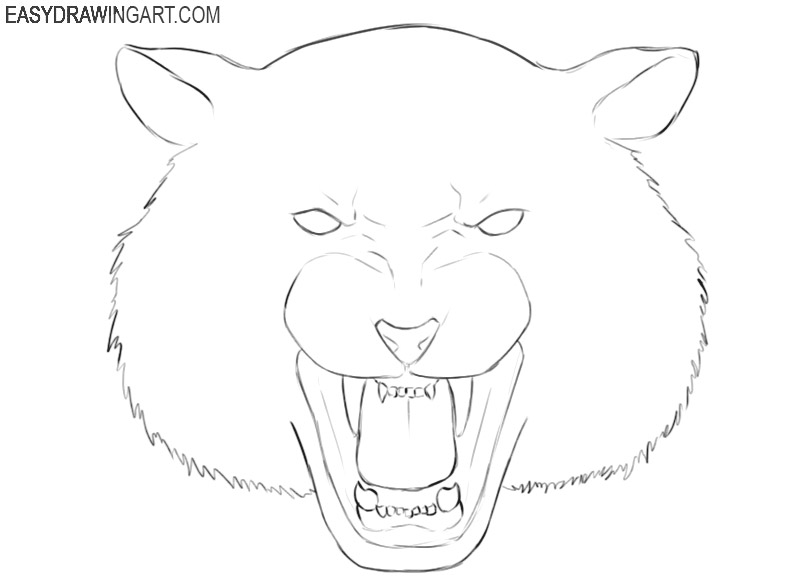 Now let’s start to portray the patterns on the big cat’s head. Start from the forehead, depicting them with a lot of short strokes. 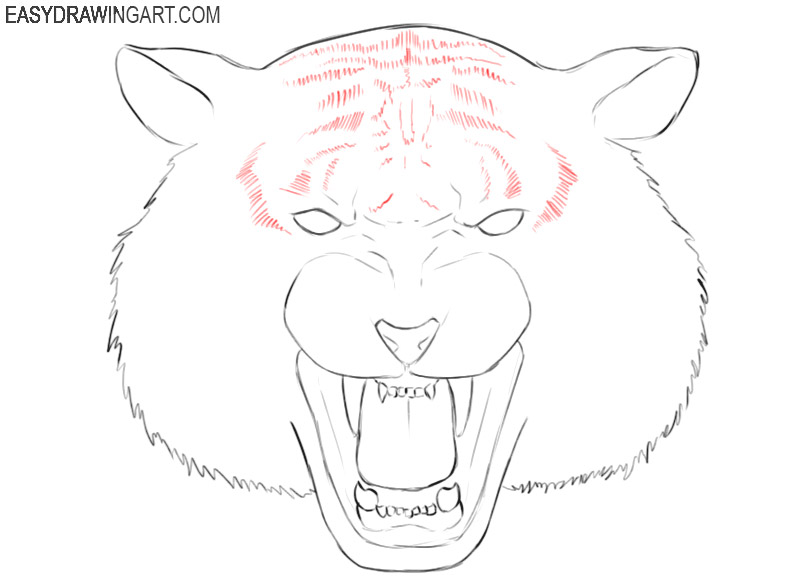 Now let’s depict the patterns on the sides of the face of the tiger. Repeat these lines as in the image from the artists of Easydrawingart.com. 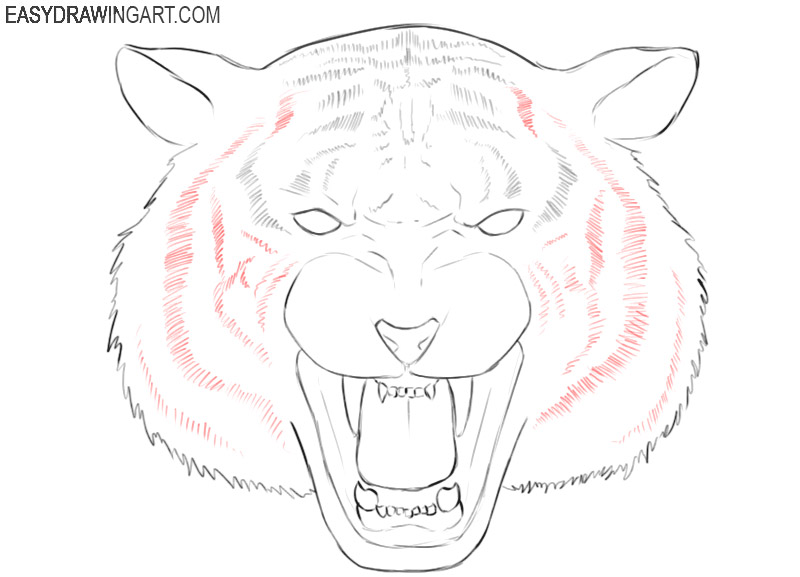 So, if you did everything right, and made no mistakes during the work, then your tiger head drawing should look something like this: 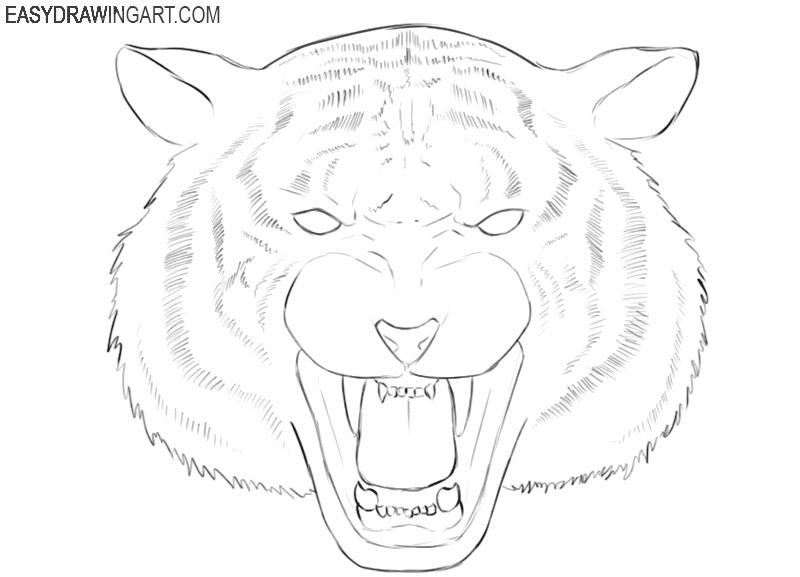 And finally, it’s time to paint the head of the tiger. Paint the upper part in orange and the lower part in white or gray. Color the eyes in yellow or green, and the mouth in pink and blue or black.

The instruction on how to draw a tiger head has come to an end, and we hope that this guide helped you. And now we would really like you to help us. Write to your opinion, because it is very important for us.