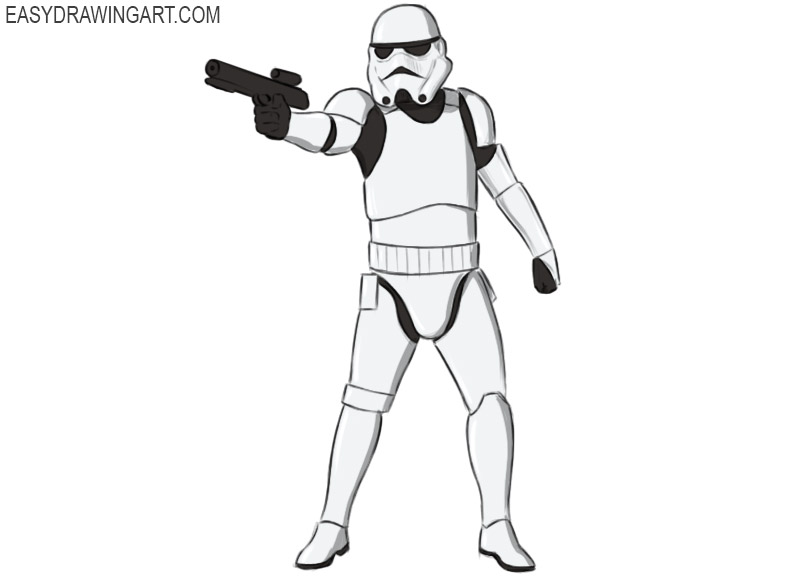 In this drawing lesson, we’ll tell you how to draw a stormtrooper from Star Wars. These are not the most formidable characters from this space opera. However, they look very cool. The figures of the imperial stormtroopers look very impressive and many collectors seek to get them.

Draw the contours of the body. The length of the head should exceed the length of the chest. You may also notice a complete absence of a neck. These two features are not typical for the average person. This is due to the large helmet that protects the head of our character. 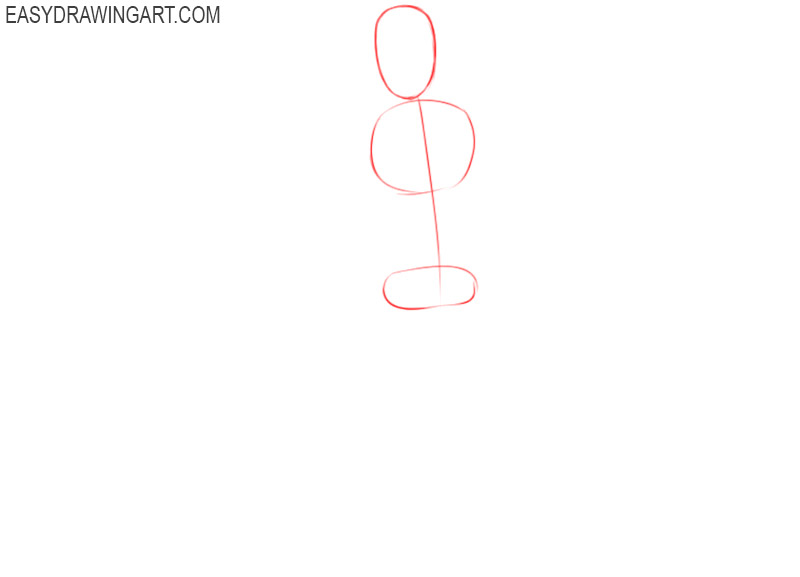 The length of the legs should equal the length of the head and body in total. One arm reaches the level of the beginning of the pelvis and the other arm looks very short. Do not forget that we do not draw feet and palms in this step. 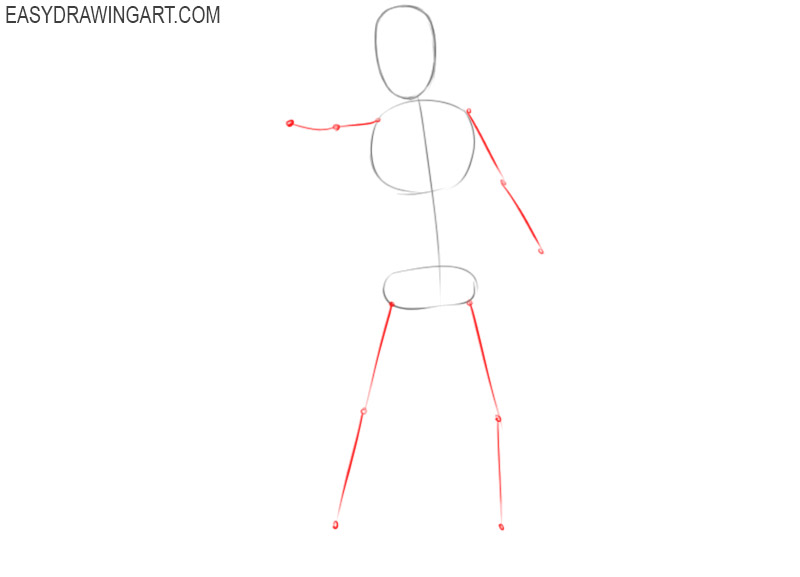 Usually we draw two lines on the face to divide this area into two vertical halves and outline the eye line. Now we will use three lines. The horizontal line will coincide with the typical line of the eyes, and the third additional line should be located slightly higher than the line of the eyes. 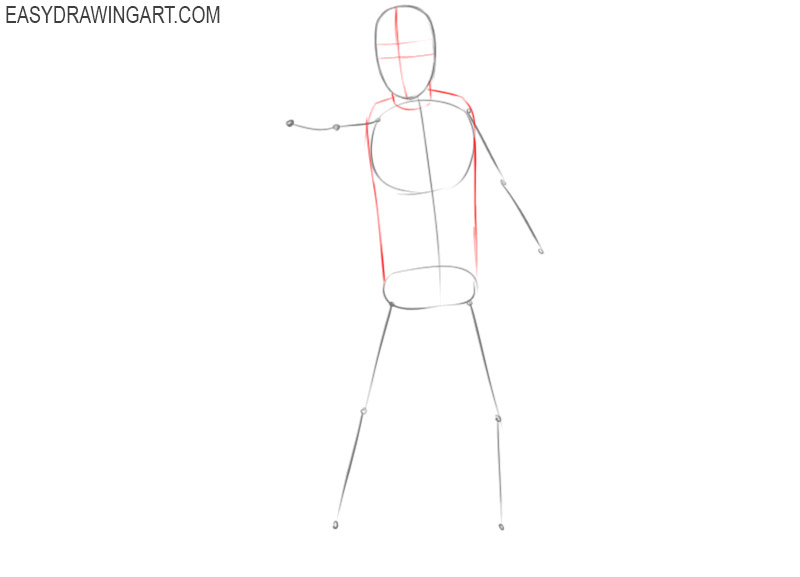 Now we will work with the hands of our stormtrooper. We outline the shoulder and forearm with the help of small cylinders. The forearm should gradually taper towards the wrist. Our character’s fists look like large, round, asymmetrical figures. 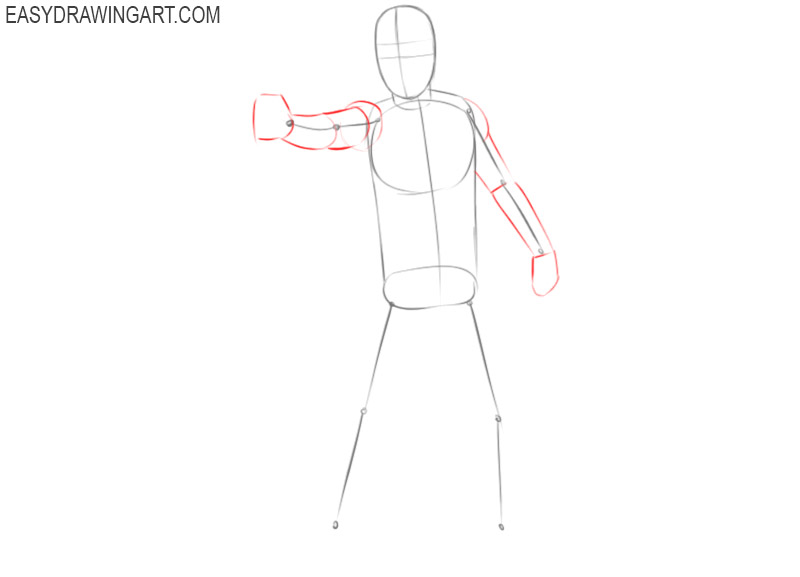 Draw the contours of the legs. Hips have a smooth narrowing towards the knee joint. The tibia has a typical smooth bend. Stormtrooper armor is very physiological, isn’t it?

Now will be a very crucial moment. The main distinguishing feature in the appearance of our stormtrooper is the helmet. Now we will draw the contours of the helmet. Pay attention to how it expands down. A helmet from this angle looks asymmetrical. Near the bottom edge of the helmet is a smooth bend inward. Lateral to this bend are two small circles. 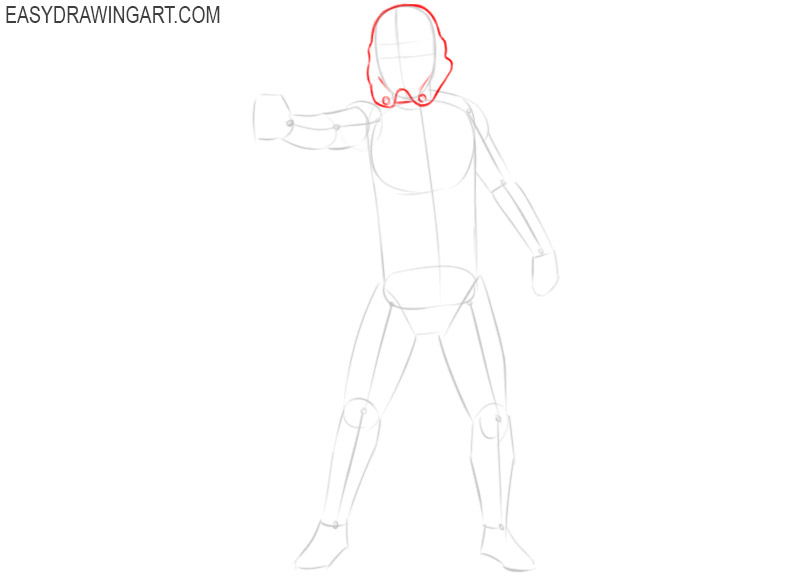 Inside the helmet outline, draw two horizontal curved stripes. Directly below these stripes, we outline eyes that look like a half ovals. Ideally, you should get a visor overhang effect. How to draw a stormtrooper’s mouth? It looks like an ordinary smile only in an inverted angle. 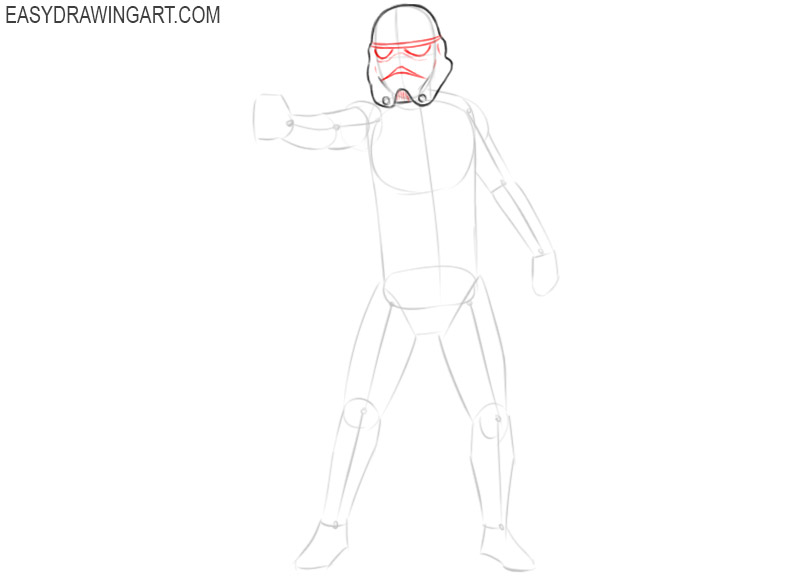 So we continue the drawing lesson on how to draw a stormtrooper. In this step, we draw the contours of an armored vest that protects the body of our stormtrooper. The armored vest consists of two parts. This is a large plate that covers the chest and a small strip of the belt. 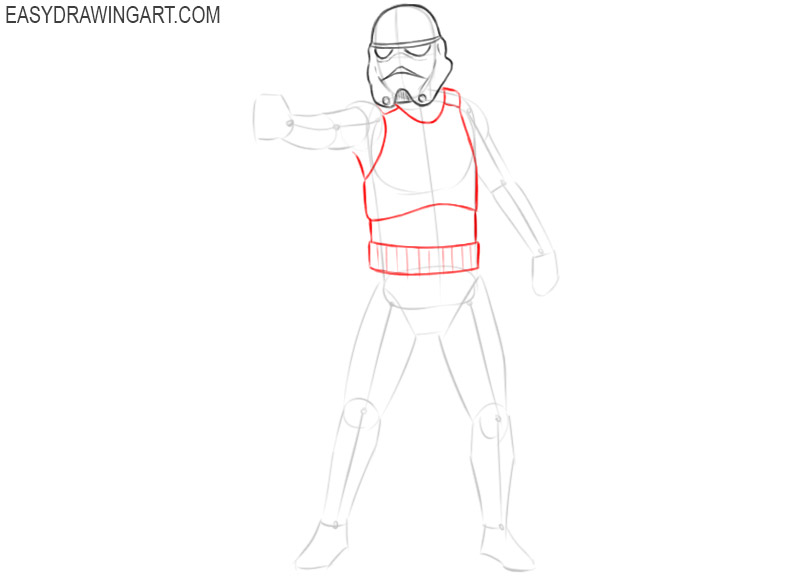 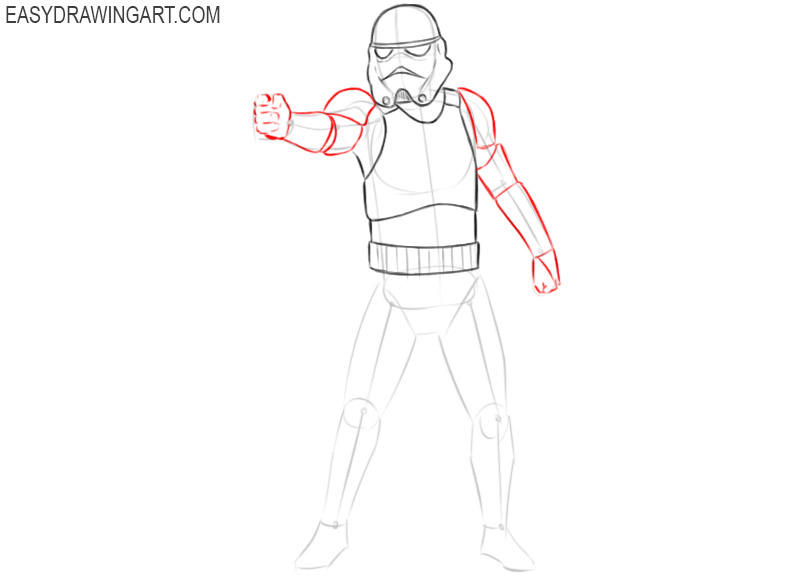 We draw a smooth protection for the groin. In the same step, we will draw the barrel of the weapon that our soldier holds in his hand. By the way, do you know that the accuracy of imperial stormtrooper’s shooting is a meme? Seriously, why do these guys never hit anyone? 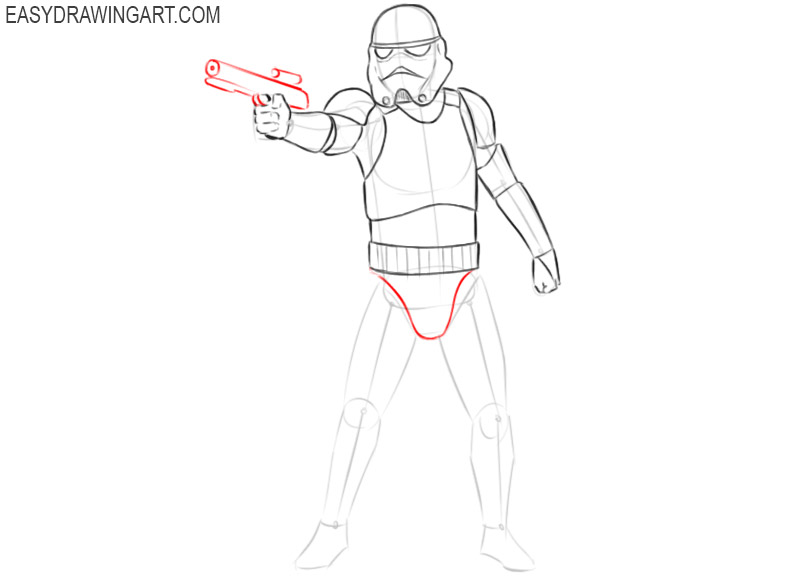 Draw the armor that covers the legs. The plates that cover the hips extend a short distance from the plate that closes the groin.We also draw small details such as armor on the knee joint and soles on boots. 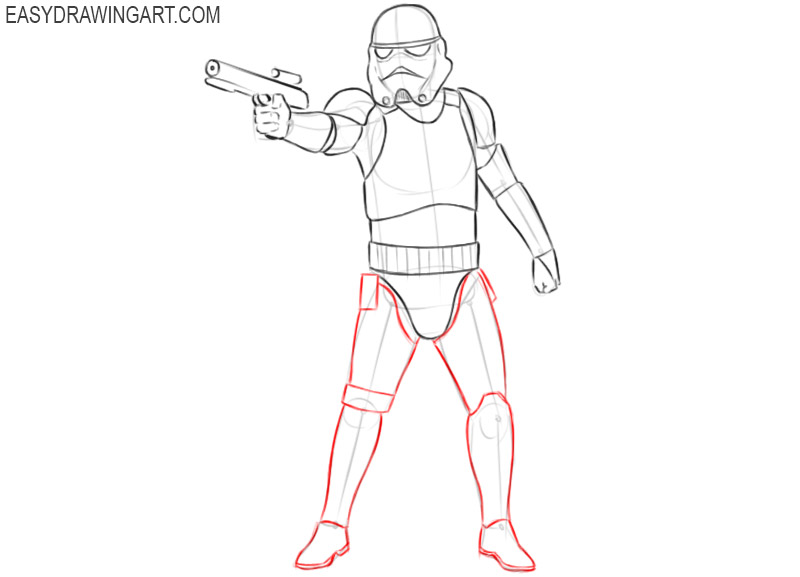 We erase all unnecessary lines from our imperial attack aircraft. We carefully look at the armor and weapons. Check proportions and posture. 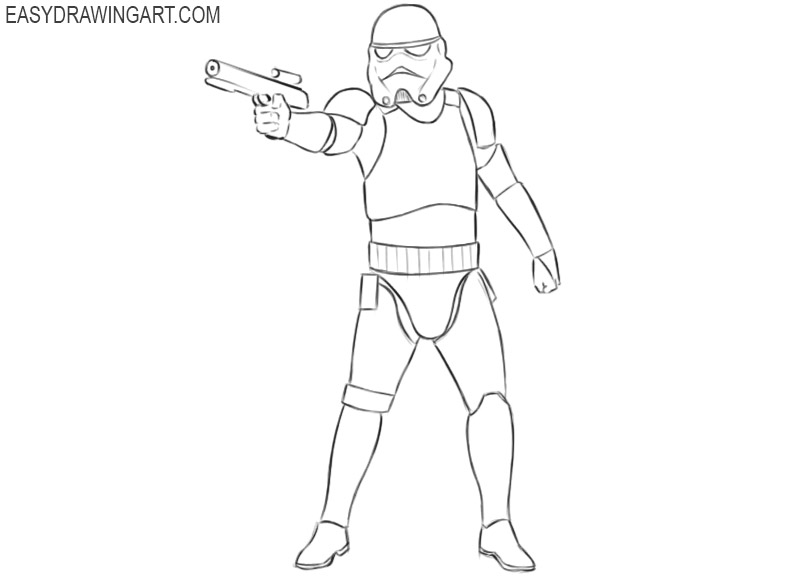 We completed this instruction on how to a stormtrooper from Star Wars. However, we hope that you succeeded and got an excellent result. If this drawing tutorial are too difficult for you, you can practice simpler lessons such as a tree or an apple.