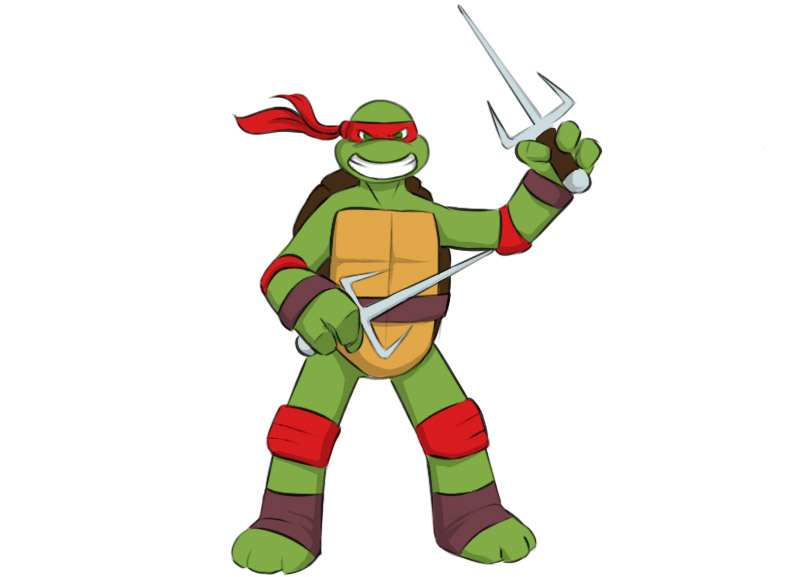 In this drawing instruction, we will tell you how to draw a Ninja Turtle. We will analyze all aspects of drawing the Superhero Turtle on the example of Raphael. This will be a very simple instruction. After you depict the last stage, you will understand that you are very good at drawing.

First, depict the contours of the head and body of our turtle. The head looks like an ordinary circle, and the body already now looks like the outline of a tortoise shell. 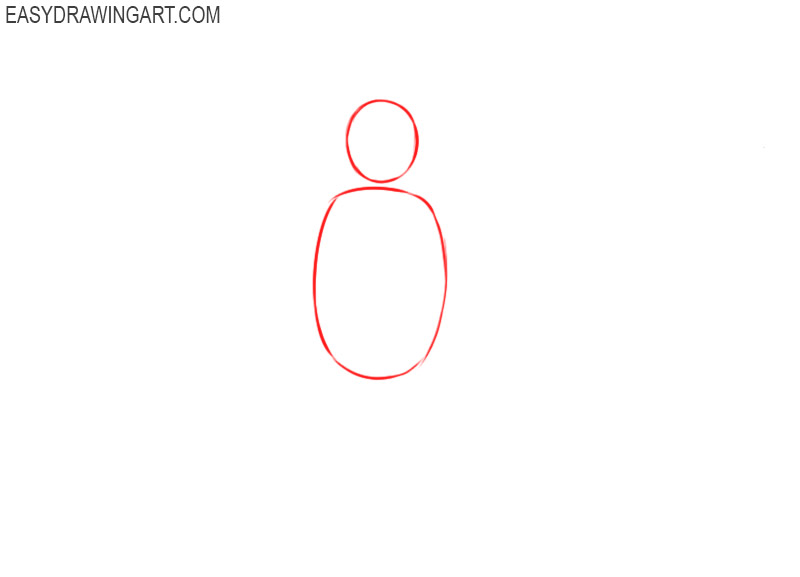 Also in this step, we will designate the extremities of our turtle with the help of ordinary sticks. 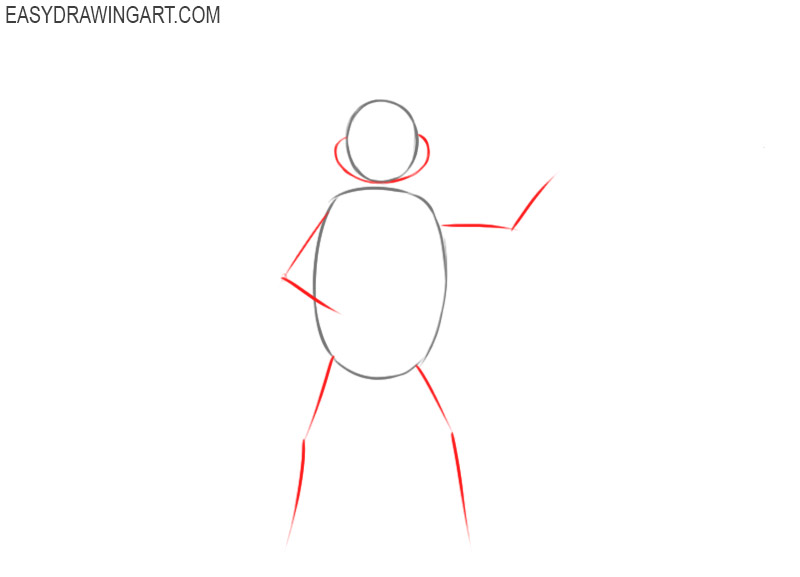 Now depict the eyes and the blindfold. To do this you need to draw two horizontal lines. The bottom line should be convex and the top line should be straight. Between these lines, we have a pair of frowned eyes. 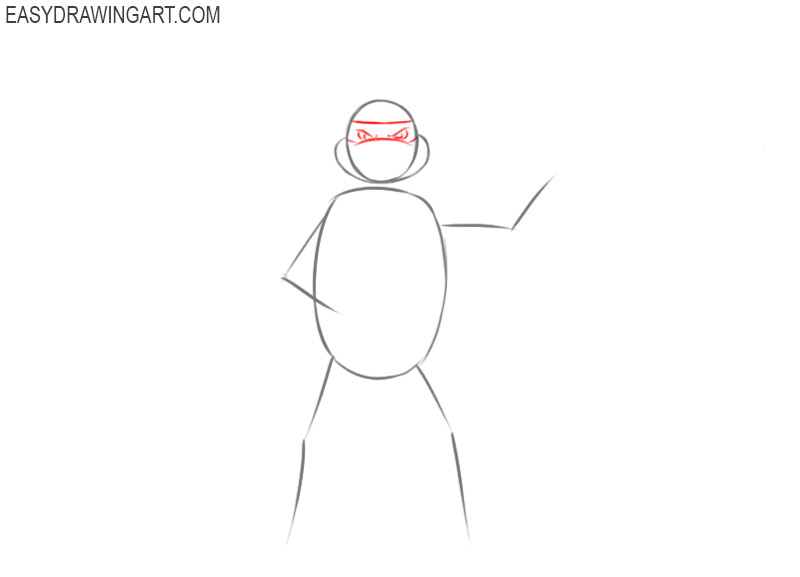 On the lower part of the face, we draw a curved smiling mouth. From the lateral side, draw a knot and fluttering ribbons. 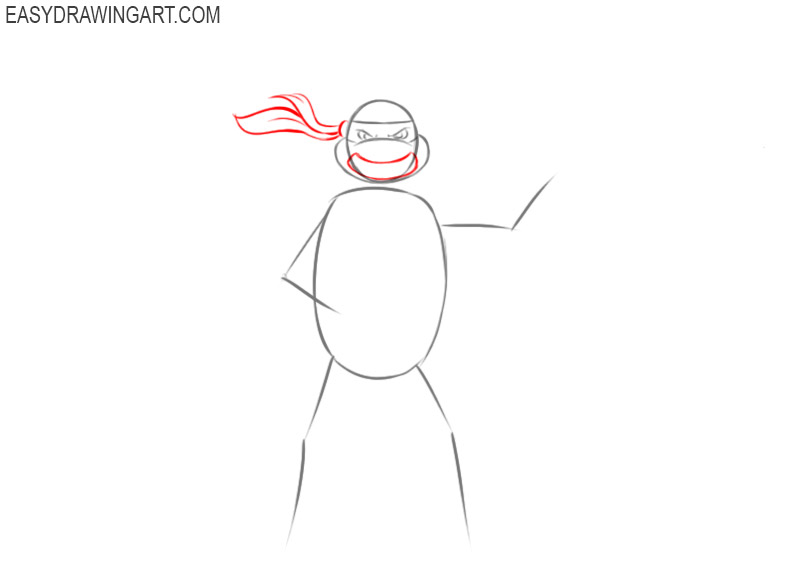 Using four short lines, we outline the circuit of the neck muscles. These muscles are very similar to the sternocleidomastoid and trapezius muscles. 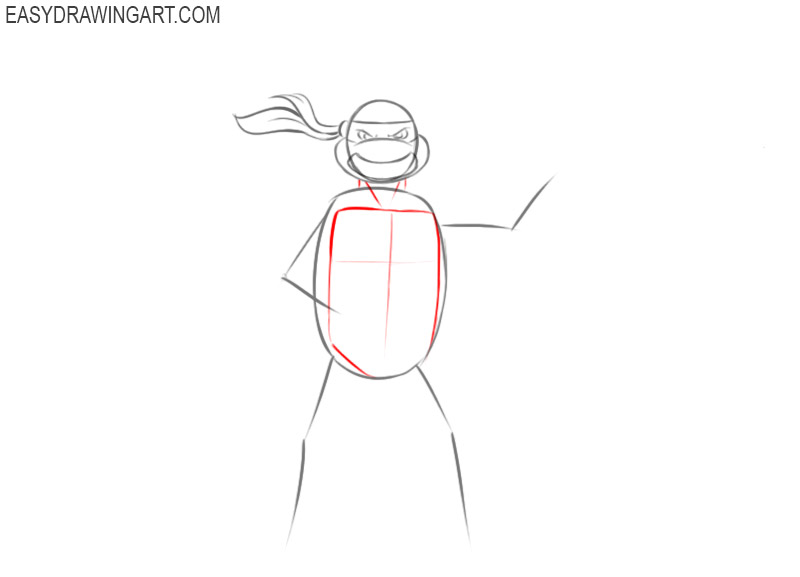 In this drawing style, ninja turtles do not have large developed arm muscles. Therefore, we simply draw rounded cylinders that correspond to the contours of the limbs from the second stage. 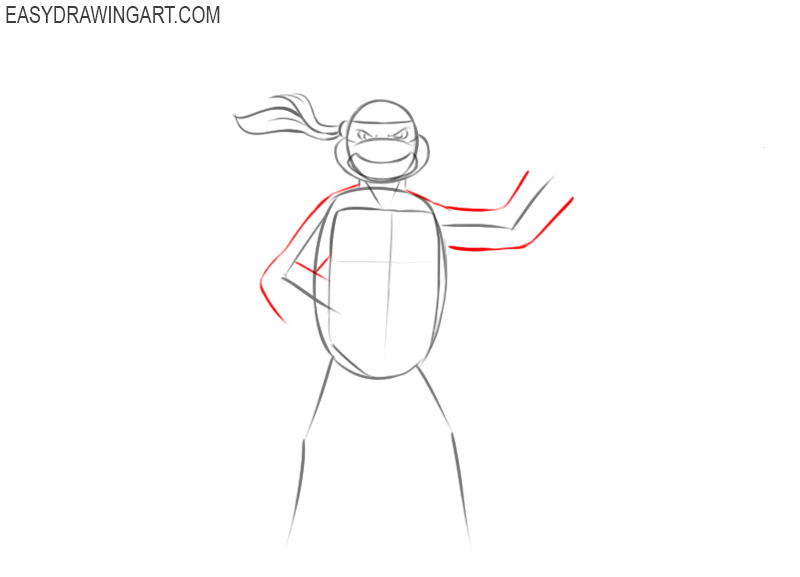 Things by which you can distinguish ninja turtles from each other are: 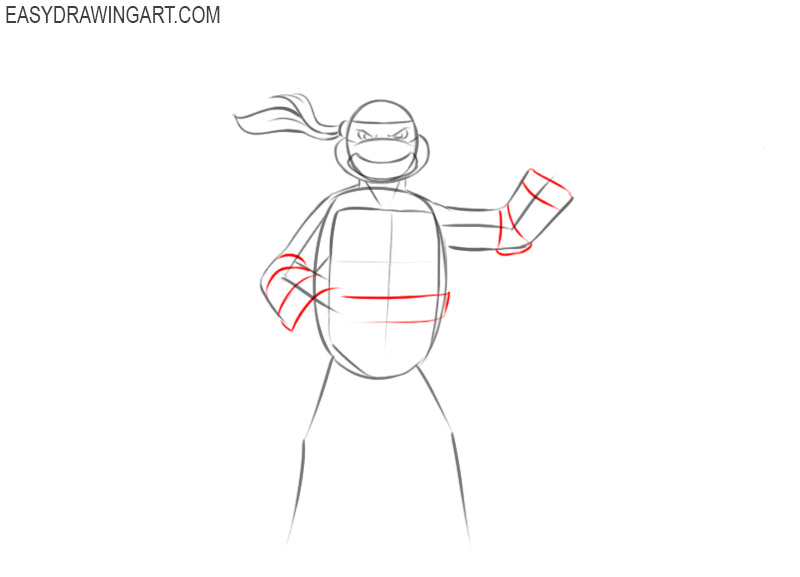 So we continue to depict our cute pizza eater. Teenage Mutant Ninja Turtles have three-fingered limbs. Therefore, we will draw three thumbs on each hand. 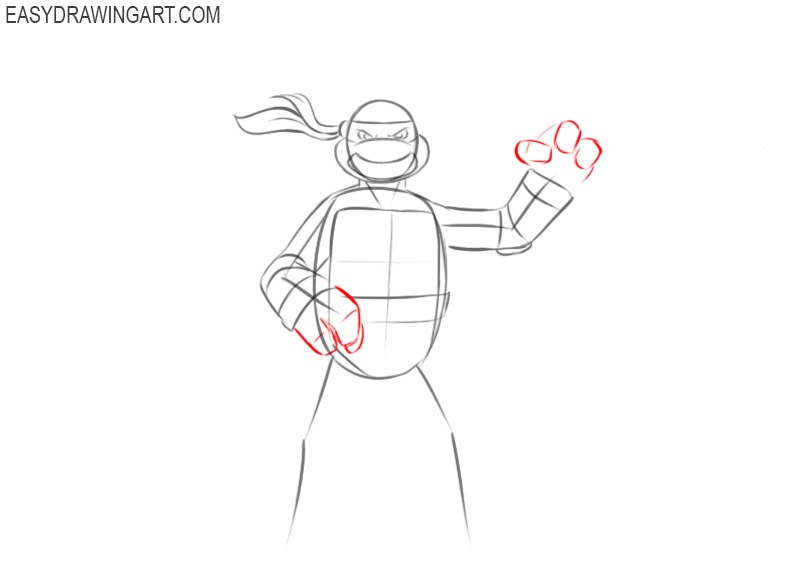 This step is quite variable. We depict Raphael so in this stage we will work on the contours of the daggers. If you are drawing Donatello you should draw a fighting staff. It seems that such a weapon is called “Bo.” 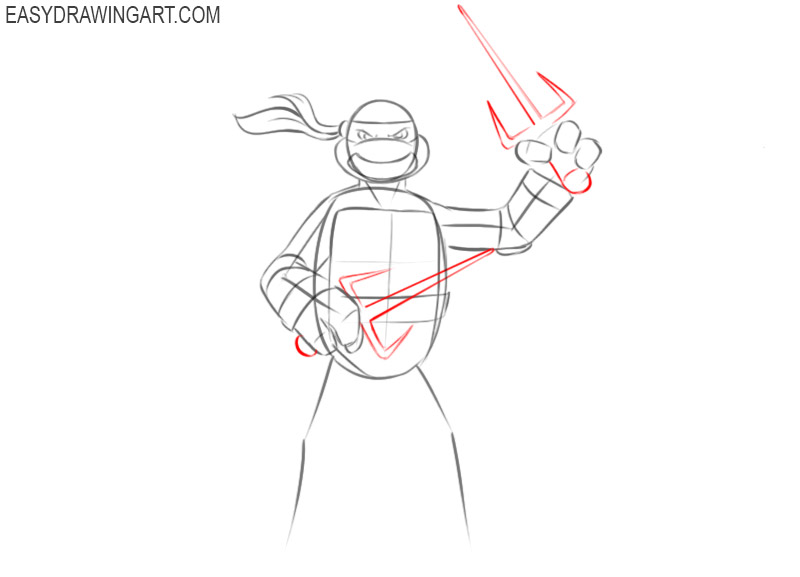 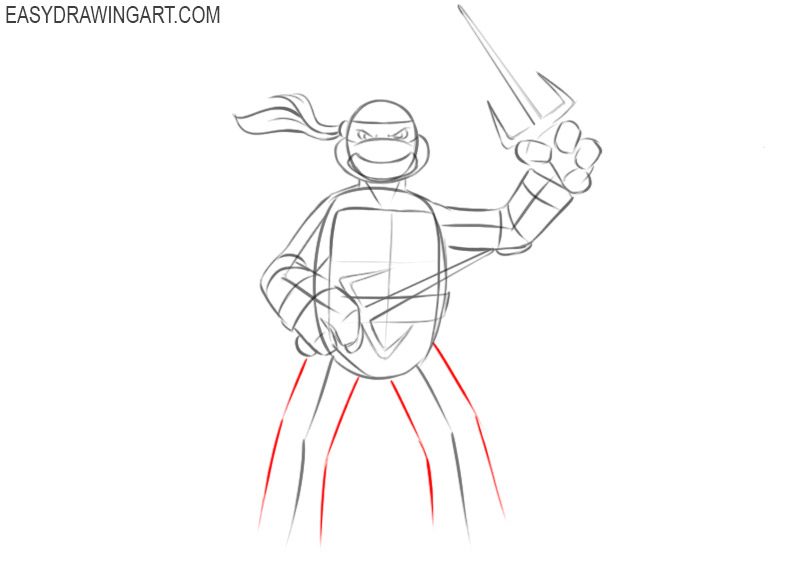 Our hero also has three toes. In this version of the appearance, these fingers are very wide and we see them as two small short dashes on the feet. Earlier Turtles had very long powerful fingers. 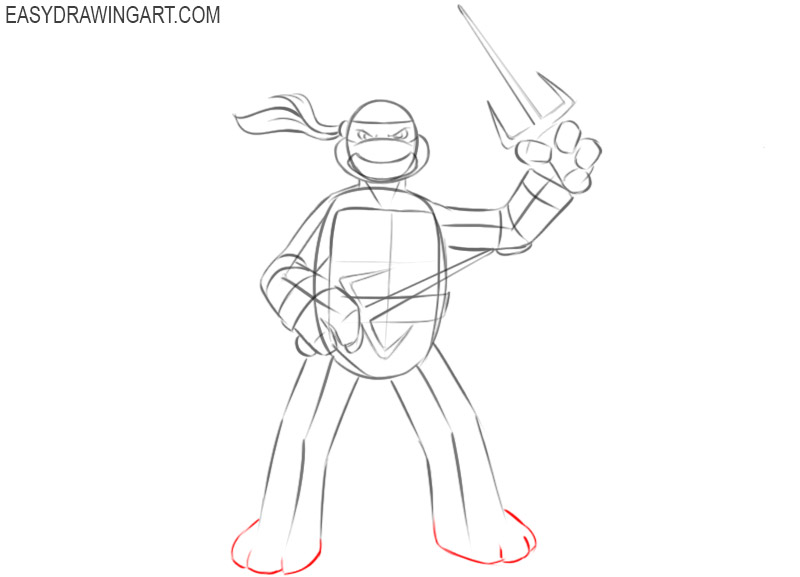 We are nearing the end of the lesson on how to draw a Ninja Turtle. This step will be a complete analogy to the step in which we drew the bandages on our hands. Here we draw dense tissue on the knee joints and around the ankles. 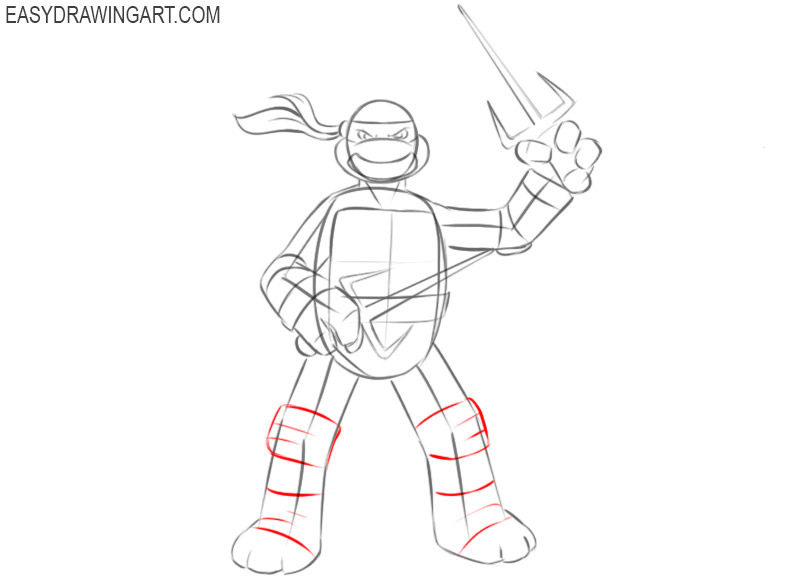 Now depict the circuit of the shell. You cannot imagine a single turtle without this part of the body, right? The carapace should show slightly behind the back of our hero. The contours of the shell should be visible from three sides of the body. 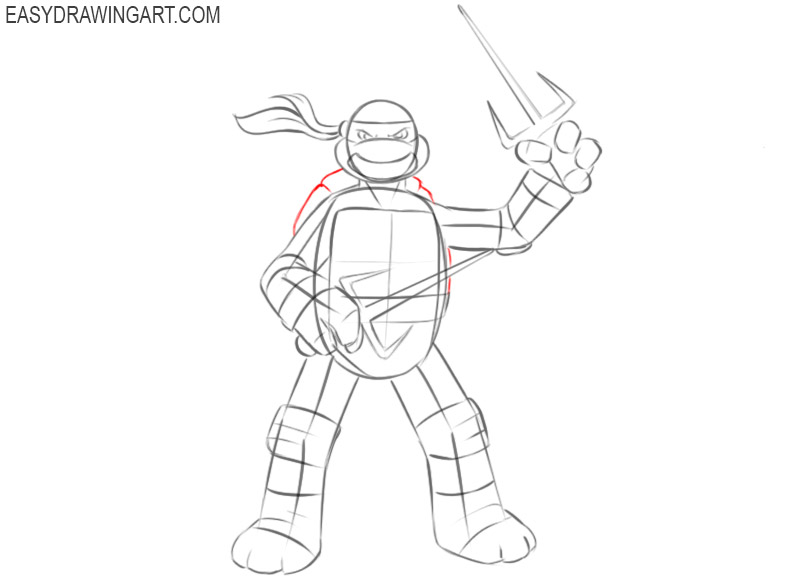 We erase all the extra lines from the weapons and from the body of our Raphael from the Teenage Mutant Ninja Turtles team. Also, we check the ratio, posture, and correctness of individual parts. 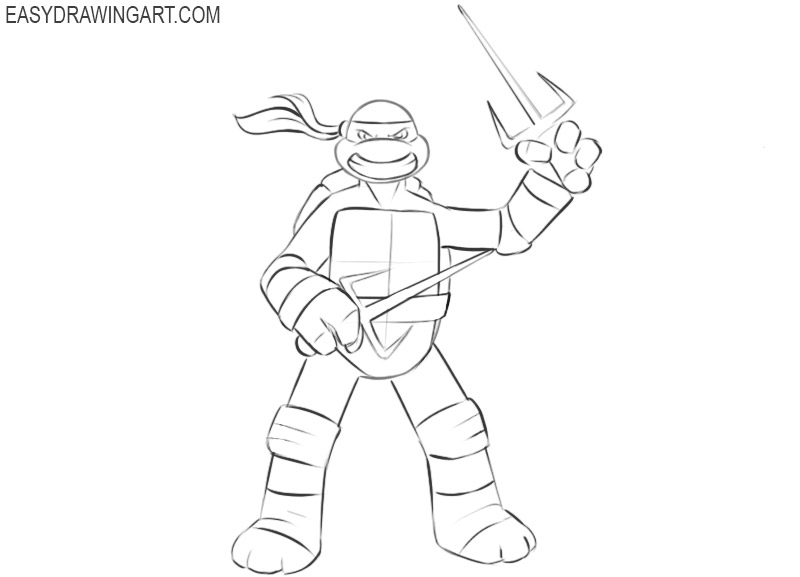 It is impossible to imagine a different base color for a ninja turtle other than green. Raphael’s corpus should be painted in dark yellow. The traditional color for the Raphael dressings is red. Do not forget the shadows.

It was a pretty difficult lesson on how to draw a Ninja Turtle. Your final outcome turned out steeper and more beautiful than our illustration for the last stage, right? If you are unsatisfied with your result, do not forget to write to us about it in the comment and then we will try to parse your mistakes.