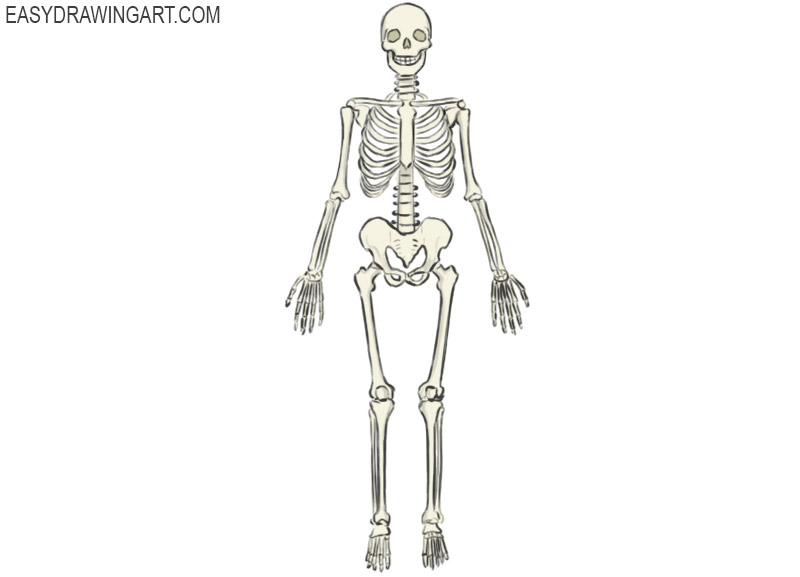 First, create a head, chest, and pelvis. Then connect all these three parts using the line of the backbone. The height of the torso together with the neck should be equal to the height of the sum of three heads. 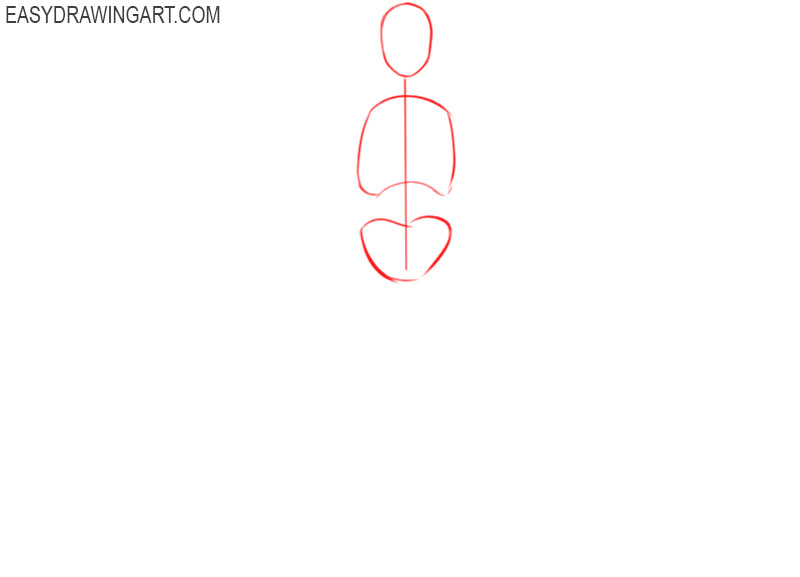 Now, using simple lines, depict the arms and legs. Legs should be slightly longer than the arms. Depict all the joints with small circles. 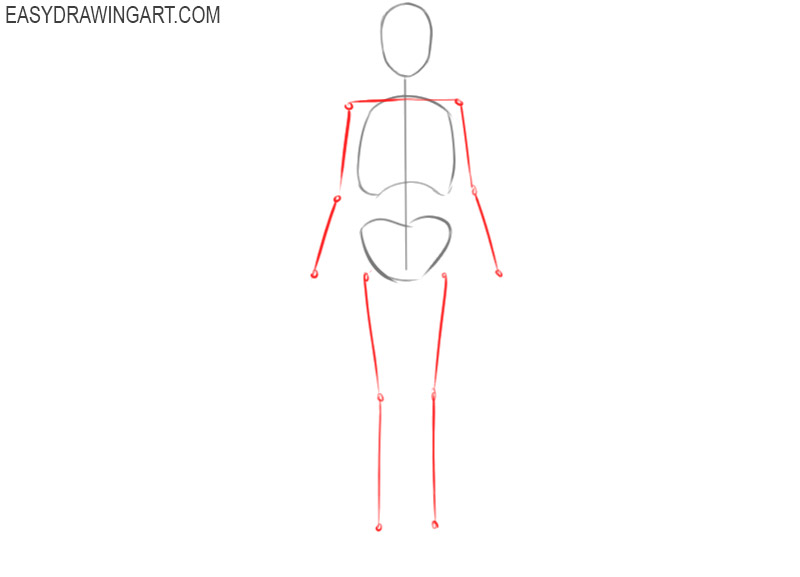 Let’s get down to the details of a skeleton drawing. First, depict the cheekbones, upper jaw, and lower jaw. In this stage we will depict jaws without teeth, we’ll depict them later. 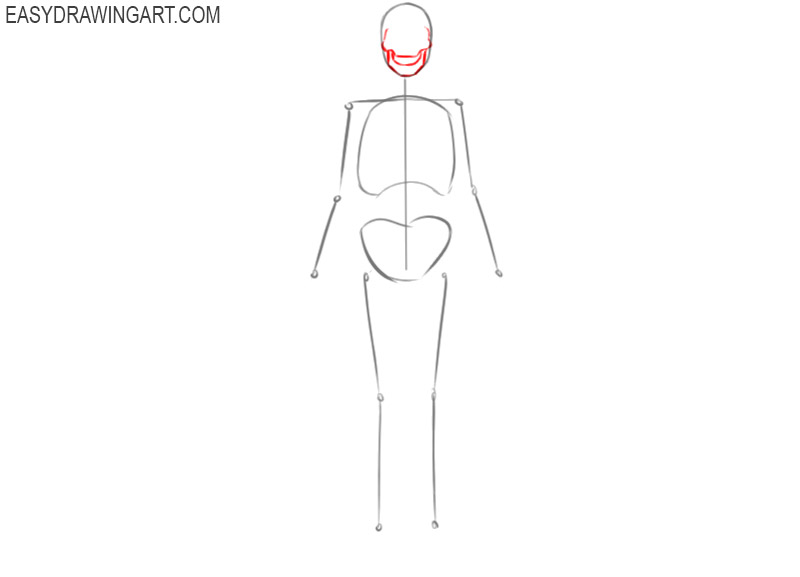 Now depict the eye orbits. Please note that they should not be round. In the center of the face, depict the nasal concha. Try to repeat the form all as the artists of Easydrawingart.com did. 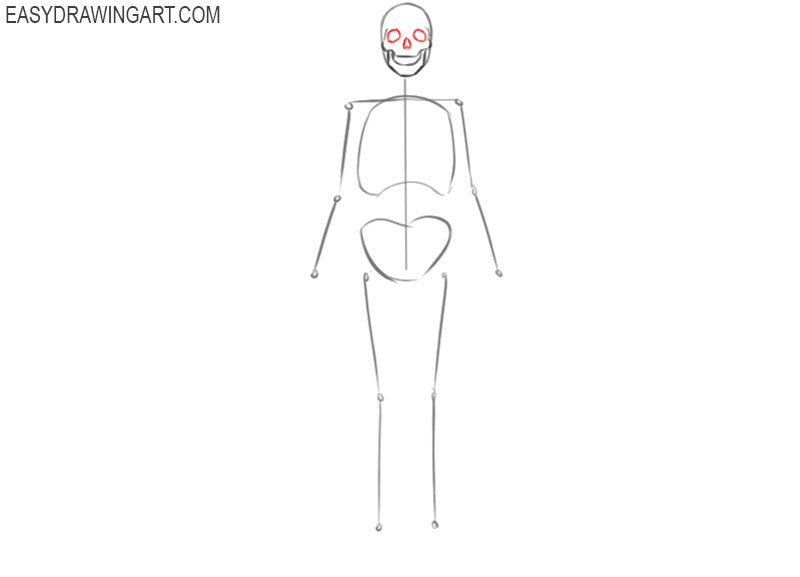 Using one horizontal and many short vertical lines, depict the teeth. Next, using a few short and flat squares, depict the cervical vertebrae. 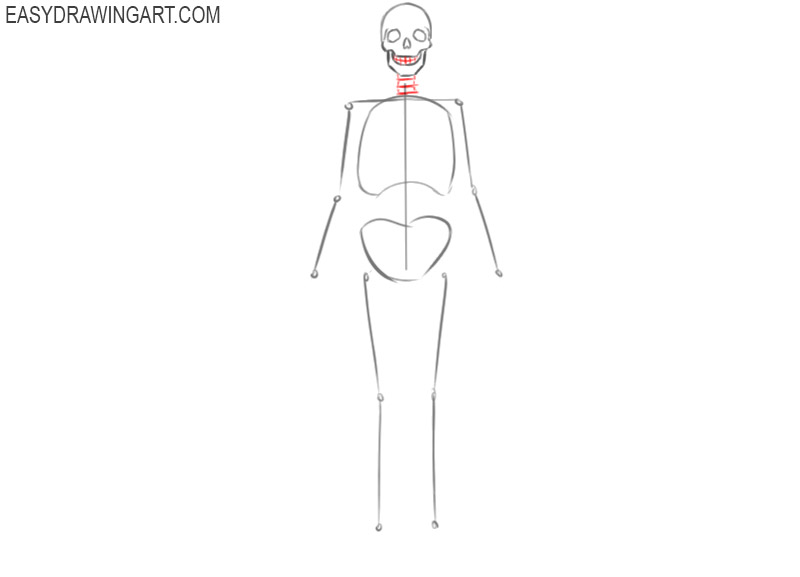 Now let’s move on to the torso. In the central part of the chest depict the sternum. At the top, depict clavicles. Complete this stage by depicting the visible portion of the shoulder blades. 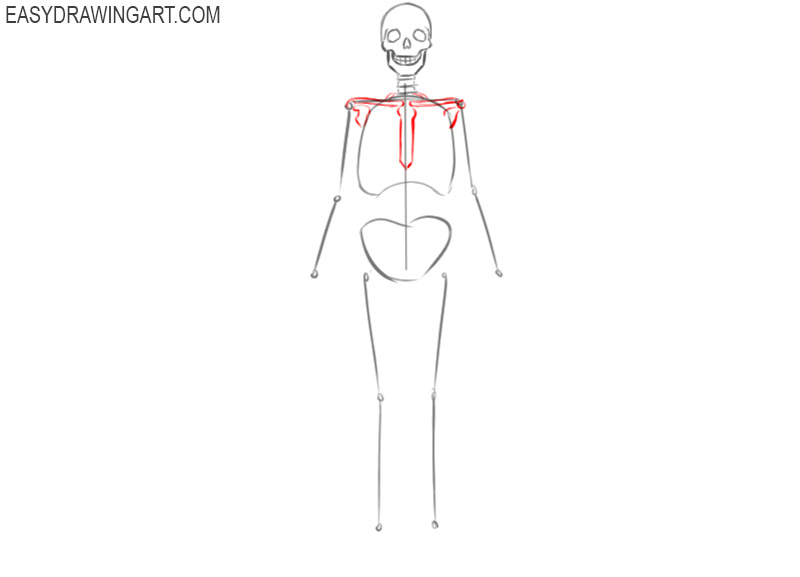 Now, using a large number of curved lines, depict the ribs. Note that the lower ribs should be smaller than the upper ones. The chest should expand smoothly closer to the bottom. 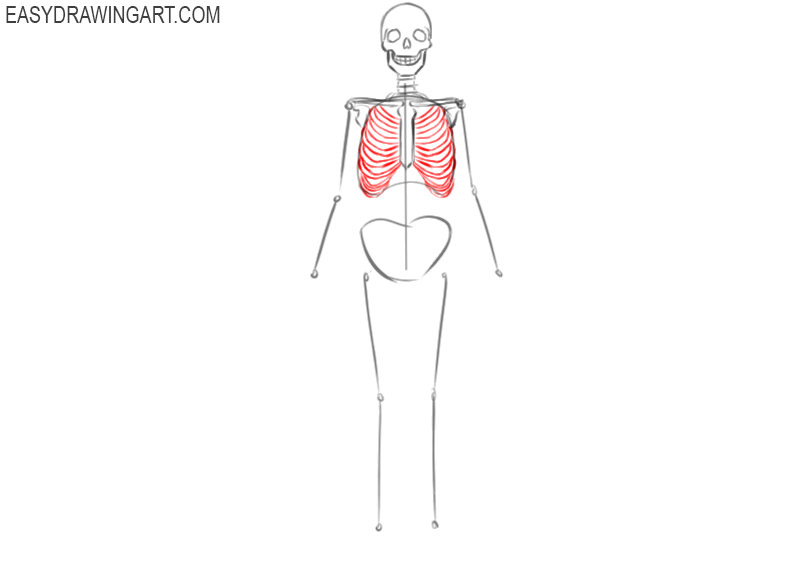 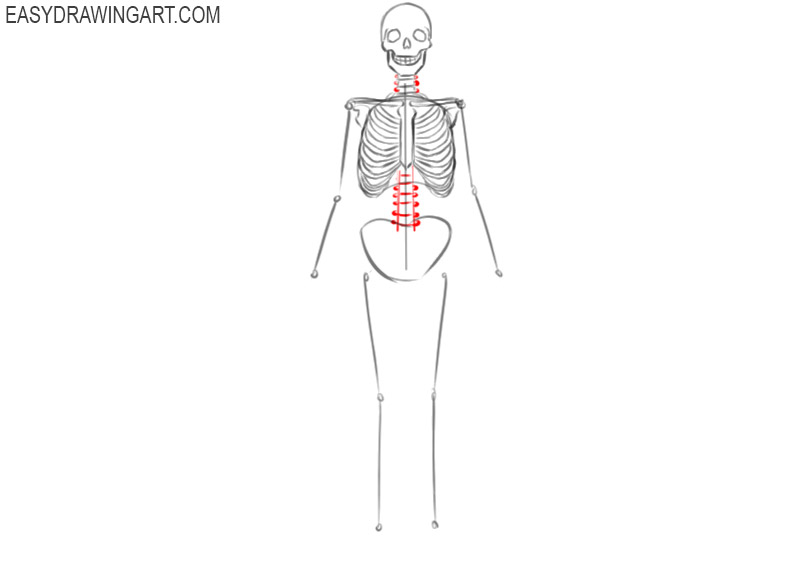 Now let’s move on to the pelvis. Carefully depict details such as the ilium, ischium, sacrum and general all other details, as did the artists of Easydrawingart.com. 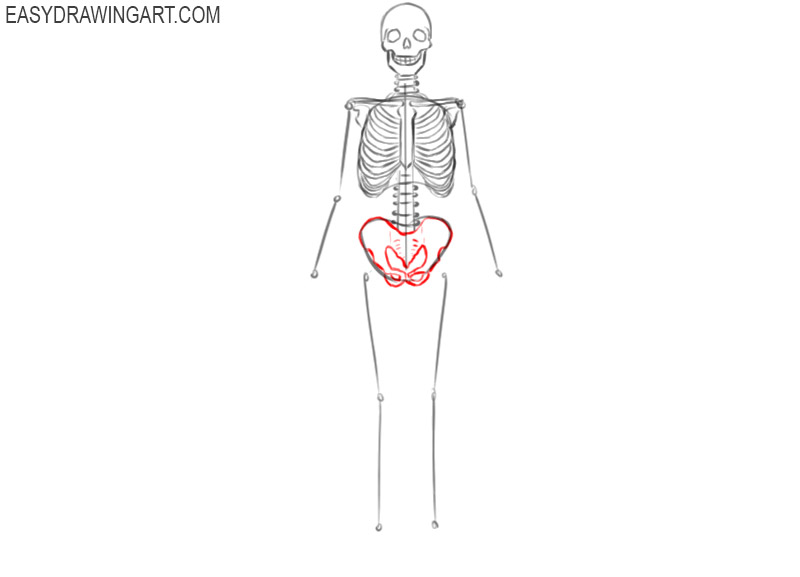 Now let’s start drawing the bones of the arms of our skeleton. Start with the upper parts, i.e. with the humerus. This bone looks as simple as possible. 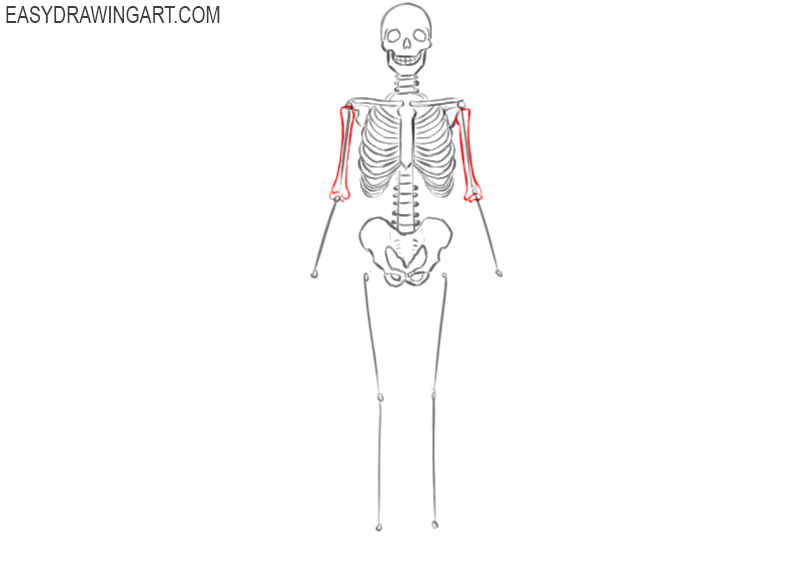 Now let’s depict the lower parts of the arms, which are two-part. The outside bone is called the radius, and the inside is called ulna. 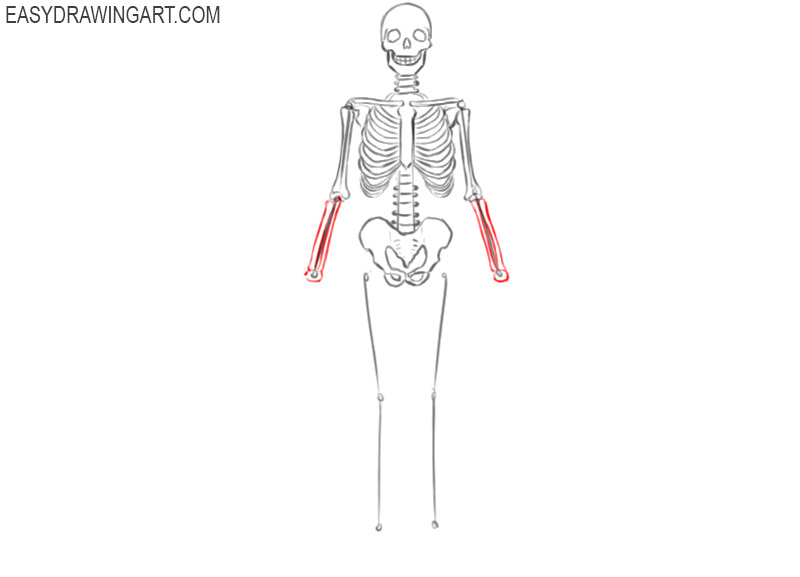 This stage will be a little more difficult because here we will depict the bones of the fingers. Using neat lines, depict all the phalanges as the artists of Easydrawingart.com did. 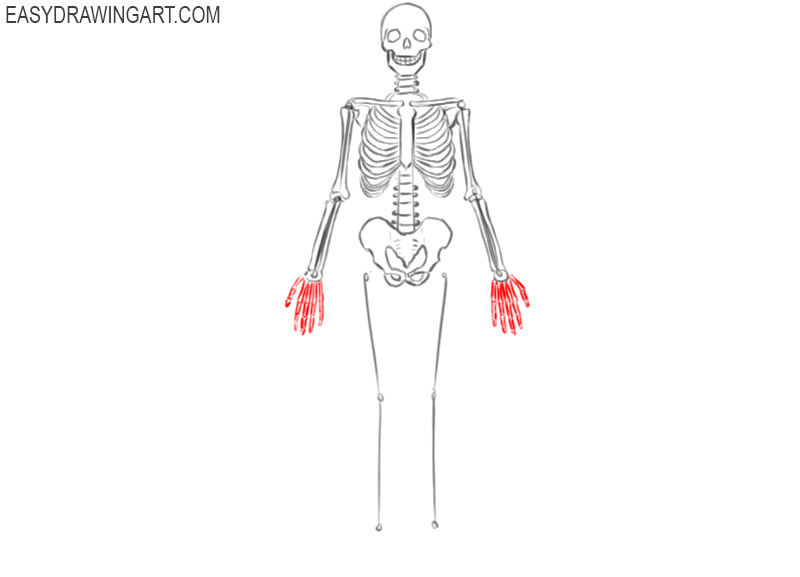 Now let’s move on to the lower part and draw the bones of the legs. Start with the upper parts of the legs and depict the femurs. Do not forget to depict the patellas. 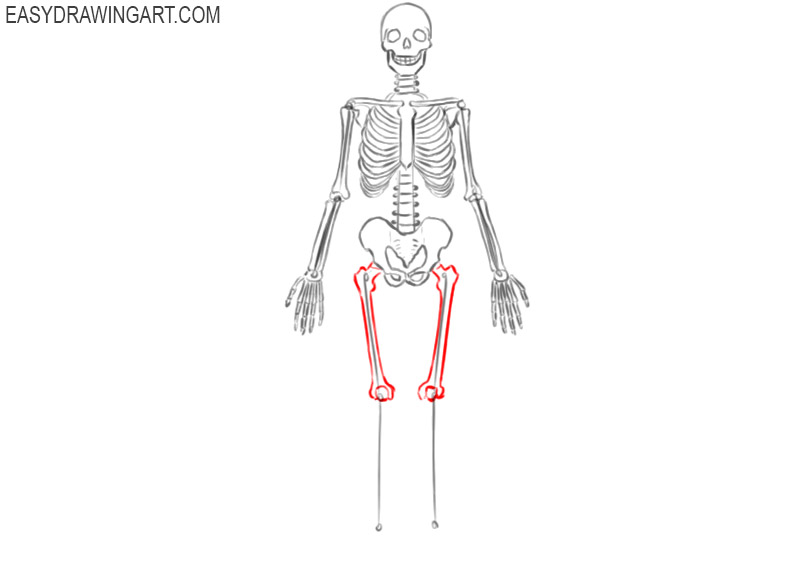 Now let’s move on to the lower parts of the legs, which also consist of two bones. The outer bones are called the fibula, and the inner tibia. 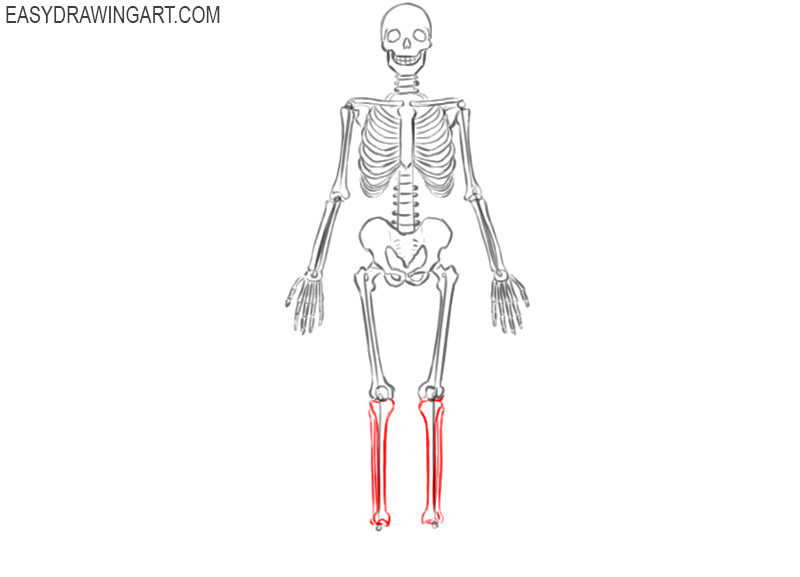 Now, following the example of the palms, depict the feet. Also, with the help of a large number of neat lines, depict all the bones of the toes as did the artists of Easydrawingart.com. 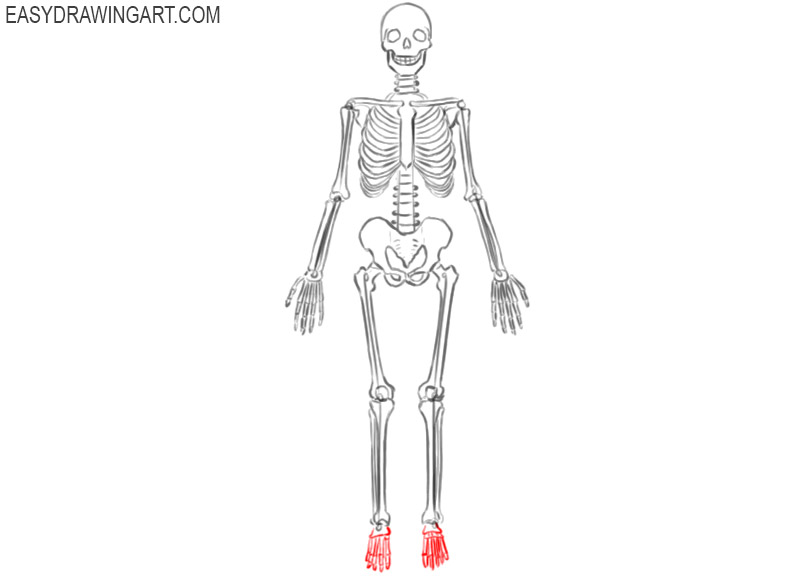 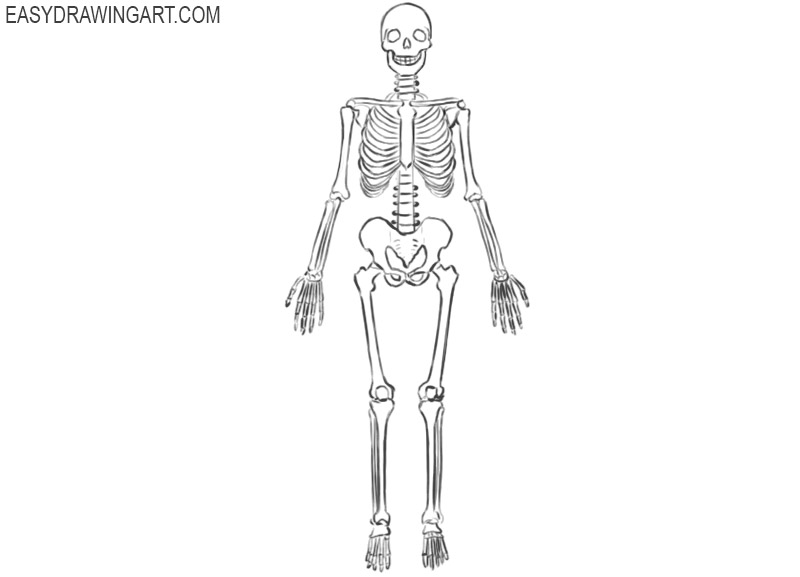 So, was this instruction useful for you and did it teach you how to draw a skeleton? We really look forward to your comments below this article, because your opinion is very important to us. We read all your comments and respond to many of them.